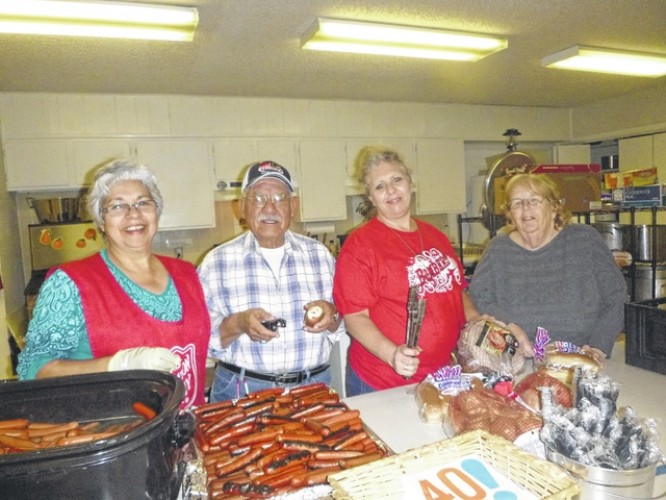 Photo: Volunteers from the Altus, OK, Salvation Army prepare meals at a warming center after severe winter weather hit the state over the holiday weekend (from the Altus Times).

OKLAHOMA CITY (December 30, 2015) – The Salvation Army is responding in both Arkansas and Oklahoma to areas affected by severe winter weather and flooding.  The same storm system that brought devastating and deadly tornadoes to Texas on December 27 brought blizzard conditions to northwestern Oklahoma, an ice storm to central, northern and southwestern Oklahoma, and torrential rains causing historical flooding in Eastern Oklahoma and across Arkansas, as well as straight line wind and tornado damage in southern Arkansas.  A State of Emergency has been declared by Oklahoma Governor Mary Fallin for all 77 counties and declarations for disaster have been made for 35 counties by Arkansas Governor Asa Hutchinson.

Oklahoma Severe Winter Weather
On Sunday, across Oklahoma, The Salvation Army opened warming centers in Altus, Enid, Norman and Oklahoma City, and Ponca City in response to winter weather including blizzard conditions and ice storms.  Additionally, warm meals were provided to those taking refuge at the warming centers and affected by power outages. As of Wednesday all of the warming centers have returned to normal daily operations.

The Altus Salvation Army also began serving a community shelter in Hollis at the request of the local emergency manager in Harmon County.   They served dinner on Tuesday and served lunch and dinner on Wednesday. Service will continue for the shelter until power is fully restored to the community.

Eastern Oklahoma / Western Arkansas Flooding
The Salvation Army units located in Tulsa and Muskogee are preparing to support and standing by for the potential to serve for flooding occurring in eastern Oklahoma along the Illinois River and Arkansas River as well as many lakes and tributaries feeding into the rivers.  Additionally, record flooding is occurring along the Arkansas River and the River Valley in Arkansas.  The Salvation Army of Fort Smith remains on standby as well.

The Salvation Army of Pine Bluff, Arkansas is coordinating with the American Red Cross and county emergency management to provide water and meals for flooding in their communities.  Boats are already being used to reach neighborhoods and historical flooding levels are expected.

The Emergency Disaster Services department of the Arkansas-Oklahoma Division is assisting the local Salvation Army units with resources necessary to support their communities for both the winter weather and ice storms, along with the ongoing and future flooding in both states. Coordination is taking place with the Oklahoma and Arkansas Voluntary Organizations Active in Disaster (VOAD) for feeding and bulk distribution of flood bucket clean up kits.

“It will take a long time for the residents to fully recover from a disaster of this severity,” said Laurie Fried, Disaster Recovery Coordinator for The Salvation Army, Arkansas-Oklahoma Division. “As one of the service providers in these two states we have long-standing partnerships that allow us to help our clients meet a very broad range of needs.”

“As we start the New Year, a time we traditionally set goals and look forward to the coming year, many of our neighbors are in crisis,” stated Fried.  “Your support of The Salvation Army allows us to provide a warm meal, an encouraging word and hope for recovery from these devastating storms.”

How to Help:
Monetary donations are always needed to offset the costs of services to storm victims. There are various ways in which to donate to help those affected in Arkansas and Oklahoma:
• Checks can be mailed to the following with “Arkansas-Oklahoma Severe Winter Weather / Flooding” in the memo:

Donations of Household Good and Clothing:
Due to the emergency situation, The Salvation Army cannot guarantee that any individual donations of household goods or clothing (gifts-in-kind) will be sent to the disaster area. In times of disaster, our stores fill these needs from existing, pre-sorted stock. PLEASE continue to donate gently-used household goods to your local Salvation Army store. You will help your community and help us prepare for future disaster relief needs. To find your nearest drop-off location, please go to www.satruck.org.

About The Salvation Army
The Salvation Army, established in London in 1865, has been supporting those in need in His name without discrimination for more than 130 years in the United States. Approximately 30 million Americans receive assistance from The Salvation Army each year through a range of social services: food for the hungry, relief for disaster victims, assistance for the disabled, outreach to the elderly and ill, clothing and shelter to the homeless, and opportunities for underprivileged children. 82 cents of every dollar donated to The Salvation Army is used to support those services in 5,000 communities nationwide. The Salvation Army tracks the level of need across the country with the Human Needs Index (HumanNeedsIndex.org). For more information, go to salvationarmyusa.org or follow on Twitter @SalvationArmyUS