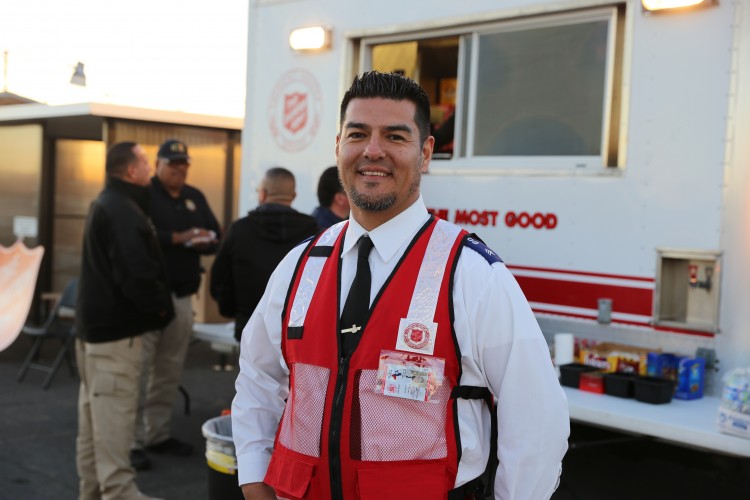 El Paso, Texas (February 18, 2016) - The Salvation Army in El Paso, with the support of the Texas Division Emergency Disaster Services team, provided meals, snacks and drinks on Wednesday to law enforcement and border patrol staff during the visit of Pope Francis to neighboring Juarez, Mexico.

The El Paso Office of Emergency Management reached out to The Salvation Army several weeks ago requesting assistance during the Papal visit. A 34-member response team was assembled consisting of staff and vehicles from Dallas/Fort Worth, Lubbock, San Angelo, Bryan College Station, and DHQ. Four Salvation Army mobile kitchens, three catering trucks, two UTVs and a Communications Unit were deployed to El Paso.

Approximately 150 volunteers were involved in several days of food preparation, in addition to 50 volunteers and 60 Salvation Army staff and Corps members who actively served on Wednesday. The menu for the day included burritos and croissant sandwiches for breakfast, meatloaf, mashed potatoes and corn for lunch, and turkey casserole, stuffing and vegetables for dinner.

Meals were served in several set locations beginning with breakfast at 4:00 AM and concluding with the completion of dinner service at 8:00 PM. More than 5,300 meals were provided on Wednesday in addition to snacks and drinks.

“As a Christian organization, The Salvation Army is excited to have been part of such a historic event in both El Paso and Juarez,” said Major Luis Viera, Area Commander in El Paso. “The Salvation Army is known all over the world for helping feed first responders so this type of feeding exercise is not foreign to us, but it is still very special because of what it means to El Pasoans and our neighbors across the border.”

The Salvation Army in El Paso is the second oldest non-profit in El Paso, having served the community for 117 years. The Salvation Army, an international movement, is an evangelical part of the universal Christian Church. Its message is based on the Bible. Its ministry is motivated by the love of God. Its mission is to preach the gospel of Jesus Christ and to meet human needs in his name without discrimination.

About The Salvation Army
The Salvation Army, an evangelical part of the universal Christian church established in 1865, has been supporting those in need in His name without discrimination for 130 years in the United States. Nearly 30 million Americans receive assistance from The Salvation Army each year through the broadest array of social services that range from providing food for the hungry, relief for disaster victims, assistance for the disabled, outreach to the elderly and ill, clothing and shelter to the homeless and opportunities for underprivileged children. 82 cents of every dollar spent is used to carry out those services in 5,000 communities nationwide. For more information, go to www.salvationarmyusa.org.
February 5, 2010