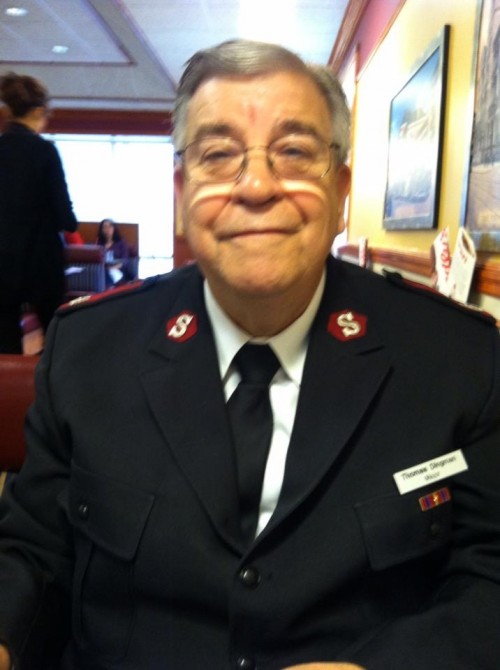 Maj. Dingman is well known to regular participants of the daily International SATERN Net as the Net Control Operator on most Friday mornings.

Dingman, born and raised in Oswego, NY, is the oldest of three brothers. During his high school days he had many interests including football, photography, auto mechanics, band and CB radio.

Upon graduating from high school in 1960, he immediately enlisted in the U.S. Air Force, eventually serving as a crew chief on C-130 aircraft. It was during his time in the USAF that his former interest in CB radio turned to amateur radio after being invited by a Tech Sgt. to tour the base MARS station.

During CFOT, Dingman met his future wife, Patricia. They were married in 1969 shortly after being commissioned as Officers. The Dingmans have two daughters, three grandchildren and two great-grandchildren.

Maj. Dingman served as an active-duty officer in The Salvation Army in many different appointments including several Salvation Army Corps (churches) and as Director of several Adult Rehabilitation Centers throughout the Eastern Territory.

Shortly after retiring from active duty as an Officer with the rank of Major in 2008, Maj. Dingman learned about and became very active in the SATERN program. Maj. Dingman says, “Throughout my years of ministry in The Salvation Army, my focus has always included helping people in need and my variety of interests including the ham radio has served me well as a helping tool. … I love the opportunities it [SATERN] provides to use the radio and help people in their time of need.”

As Eastern Territory SATERN Coordinator, Maj. Dingman reports to the Territorial Disaster Coordinator and is responsible for development of the Eastern Territory’s SATERN network and overseeing the relations between SATERN and other amateur radio networks and organizations in the Territory. He is also responsible for activating SATERN in the event of a major Territorial disaster or providing SATERN support to a Division that needs communications support.

SATERN volunteers in the Eastern Territory may contact Maj. Dingman at Tom@K2QMU.net. He can also often be found on the International SATERN Net at 1500 Z on 14.265, especially on Friday when is the primary Net Control Operator.

SATERN volunteers are encouraged to contact Maj. Dingman and wish him well in his new duties and to keep him in their prayers as he takes on his new duties