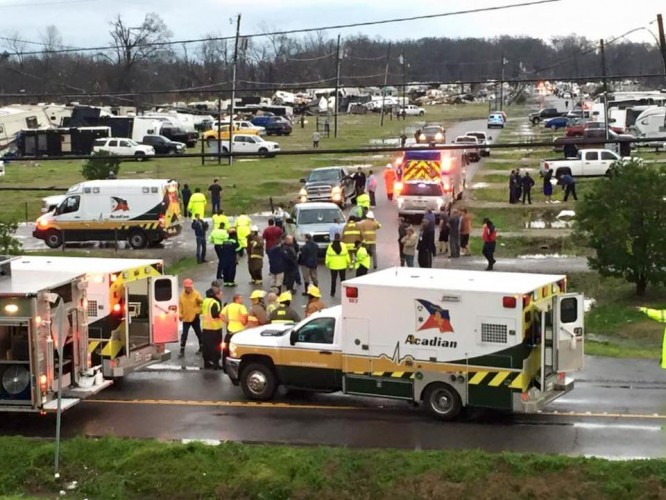 Severe weather moved across the Alabama, Louisiana, Mississippi Division Tuesday afternoon into early Wednesday morning and brought heavy rain, high winds and several tornados with it. The Salvation Army responded to the Sugar Hill RV Park in Convent, Louisiana which saw the worst of the devastation. The Baton Rouge Corps and New Orleans Command both responded with canteens and volunteers to serve first responders and residents whose vehicles were literally turned upside down from the high winds brought by the storms.

“A great team of people headed straight to Convent once we learned of the need last night.  This is difficult work for the first responders, and we are just glad to be able to serve and help them do what they have to do”, said Captain Brett Meredith Baton Rouge Corps officer.

Between the Baton Rouge Corps and the New Orleans Command, over 200 meals were served, 400 drinks and snacks, and twenty pairs of socks and six pairs of gloves were handed out. Plus, officers on site provided spiritual care to those who requested our help.

Local officials have confirmed two deaths and 30 injuries from this location.

“Our hearts go out to those who lost loved ones last night, and we pray that our work may ease the burden that everyone feels during times like these”, shared Captain Meredith.

“The Salvation Army is committed to insuring that the emergent needs of our community are met when needed,” Major David Worthy said. “When crisis occurs, we’re there to support victims, first responders and anyone else in need of help.”

Financial donations are the best way to support those affected by these devastating tornadoes.

Donations can be made:
online at https://donate.salvationarmyusa.org/uss/February_2016_Tornadoes,
by phone 1- 800-SAL-ARMY
by text message: text STORM to 51555 to receive a donation link for easy mobile giving
by mail: The Salvation Army Disaster Relief, P.O. Box 470, Mansura, LA 71350

While used clothing and used furniture are seldom required during disaster response, these gifts are vitally important in supporting the day-to-day work of The Salvation Army. Please consider giving these items to the local Family Store by dialing 1-800-SA-TRUCK (1-800-728-7825).

For the latest emergency disaster services news from The Salvation Army, please visit www.disaster.salvationarmyusa.org or follow the social feed on Twitter at @salarmyeds.


About The Salvation Army
The Salvation Army, an evangelical part of the universal Christian church established in 1865, has been supporting those in need in His name without discrimination for 130 years in the United States. Nearly 30 million Americans receive assistance from The Salvation Army each year through the broadest array of social services that range from providing food for the hungry, relief for disaster victims, assistance for the disabled, outreach to the elderly and ill, clothing and shelter to the homeless and opportunities for underprivileged children. 82 cents of every dollar spent is used to carry out those services in 5,000 communities nationwide. For more information, go to www.salvationarmyusa.org.