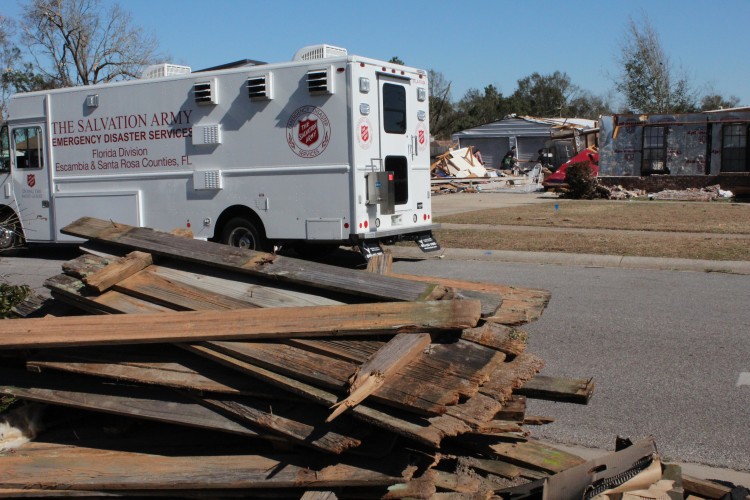 Families in Northeast Pensacola, Florida are counting their blessings Wednesday after a terrifying night of howling winds, flying debris and a plethora of uncertainty.  An EF-3 tornado worried hundreds of people in its path Tuesday night.
As first responders tried to perform search and rescue efforts immediately after the storm, it wasn’t until daybreak Wednesday morning the depth of devastation became clear.

“It was bad, you couldn’t even recognize that place.  Cars were flipped upside down, stuff everywhere” said a Salvation Army Emergency Disaster worker as he assessed the damage.  Throughout the heartache and pain many storm victims were able to smile knowing they are just grateful to be alive.  Many of the people affected by the storm (storm victims, first responders, members of the media and volunteers) steadily came to The Salvation Army mobile canteen throughout the day to receive hot fresh hamburgers, juice, water, ice, cleaning supplies and cases of water.

Time spent on the ground in the hardest hit areas offered Salvation Army employees and volunteers a chance to grasp the importance of their work.  Those are not just burgers and drinks The Salvation Army is handing out, those items give storm survivors a reason to have HOPE.

Despite the devastation, only a handful of minor injuries were reported, and no fatalities.