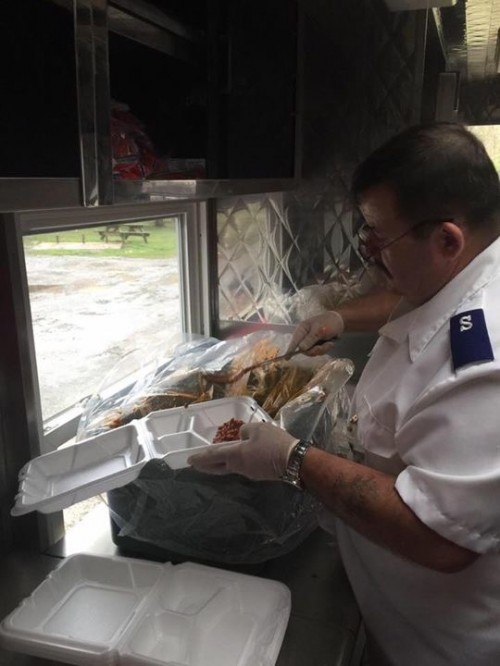 JACKSON, MS (March 12, 2016) –The Salvation Army of Alabama, Louisiana, and Mississippi has increased the number of Salvation Army Corps serving in areas affected by flooding from five to eight because of local needs to the rising flood waters.

The McComb (MS) Corps has served 315 snacks and 200 drinks at a shelter located at Eagle Crest Church in the town of Ticfaw, La. (Tangipahoa Parish). “Although we are based in Mississippi the parish is in our service area.” said Captain Andy Bailey, McComb Corps officer. “We are pleased with the partnership that exists in this community allowing the opportunity to provide disaster relief to citizens now and in the future.”

Relief efforts continue to be provided by the Baton Rouge, New Orleans, Shreveport and Monroe Corps in devastated areas of Louisiana. Staff and volunteers are serving meals and drinks to those who are displaced from flood waters and first responders helping keep the public safe.

The Monroe Salvation Army served 300 meals so far Saturday not to mention drinks and clean up kits, plus provided emotional and spiritual care to those who requested it.

“Monetary donations are always eagerly accepted, especially in emergency situations,” said Major Ed Binnix, Shreveport Corps Commander, “The monetary donations allow us to stimulate the local economy which has been impacted by the disaster and enable us to purchase what we need when we need it.”

In Mississippi, the Greenville Corps continues to provide meals and hydration to a shelter located at the Washington County Convention Center. The Jackson MS Corps  continues to provide four volunteers, and two mobile canteens to support disaster relief efforts in Monroe, Louisiana.

The Salvation Army in several other locations is also on standby due to National Weather Service concern with current river stages and the affect the flooding could have in the future.

“We are ready to respond should flooding expand to other areas,” said Terry Lightheart, Emergency/Disaster Services Director, The Salvation Army of Alabama, Louisiana, Mississippi. “This is a threat that could last for several more days.”

The Salvation Army asks people who want to help those affected by these storms to please give monetarily through this link: http://give.salvationarmyusa.org/march2016floods

About The Salvation Army
The Salvation Army, an evangelical part of the universal Christian church established in London in 1865, has been supporting those in need in His name without discrimination for more than 130 years in the United States. Nearly 30 million Americans receive assistance from The Salvation Army each year through the broadest array of social services that range from providing food for the hungry, relief for disaster victims, assistance for the disabled, outreach to the elderly and ill, clothing and shelter to the homeless and opportunities for underprivileged children. 82 cents of every dollar The Salvation Army spends is used to support those services in 5,000 communities nationwide. For more information, go to www.salvationarmyalm.org.