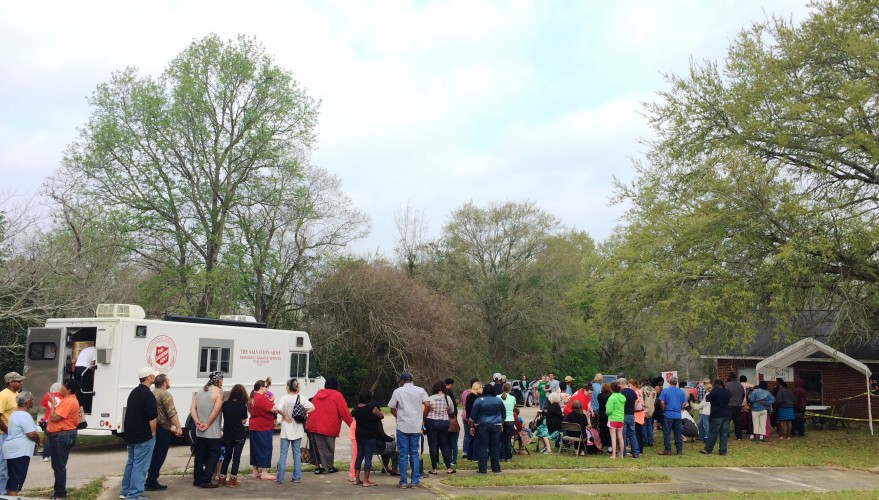 Volunteers from The Salvation Army’s Newton County Service Unit are working to help affected residents from their surrounding communities. A distribution center has been established at the Newton County Agriculture Building (509 Main St. Newton, TX) where clean-up kits, bottled water and donated clothing are available to those who have already experienced significant losses due to the flooding. The center is open from 9:00AM-4:00 PM Monday through Saturday with Sunday’s hours to be determined. Emergency assistance, in the form of gift cards, is being distributed by Salvation Army staff and volunteers in conjunction with individual and family case management.

Four Salvation Army disaster vehicles are currently in use in the area; a mobile kitchen, two catering trucks, and a Rapid Response Unit. Additional units remain on stand-by ready for deployment as necessary. The mobile kitchen from the Pasadena Corps is staged at the Newton distribution center where staff are preparing and distributing meals serving the Newton, Kirbyville and Burkeville areas. The Rapid Response Unit has been roving through Northern Orange County, Jasper and Newton providing meals and hydration to first responders and residents in need.

Volunteers Dwayne and Diane Walters, from The Salvation Army in Bryan College Station, arrived in the area on Wednesday morning and anticipate serving for at least a week. The couple has had a very busy year having already worked in the extensive relief effort following the tornadoes that hit Dallas in December and in El Paso during the Papal visit to Juarez, Mexico, in February. “Thousands of people have been displaced from their homes and many more are trapped or are working to salvage what they can. We are privileged to serve with The Salvation Army and happy to help in any way we can,” said Dwayne, who is also a Salvation Army Advisory Board member.

Beginning on Thursday The Salvation Army will set up a fixed feeding site in the community of Deweyville that has been virtually cut off by the floods. This will be located at the High School where staff anticipates serving more than 300 meals daily.

“We continue to serve the residents affected by the flooding in partnership with The Texas Baptist Men Disaster Relief and Southern Baptist Convention of Texas,” said Alvin Migues, Emergency Disaster Services Director for The Salvation Army. “These partnerships are very important during times of disaster. We are working closely with local and state emergency management as well as other voluntary agencies to meet the needs of the community.”

Donations to support the ongoing Salvation Army response efforts can be made by texting STORM to 51555, or by calling 1-800-SAL-ARMY, or online at give.salvationarmyusa.org/texasfloodsandtornados

If you are interested in learning more about The Salvation Army Emergency Disaster Services (EDS) in Texas, or to become a local disaster volunteer, please visit: www.disaster.salvationarmyusa.org.

For the most up-to-date emergency disaster services news from The Salvation Army in Texas, please visit: www.disaster.salvationarmyusa.org and follow latest updates on Twitter @SalArmyTXEDS and Facebook at www.facebook.com/SalArmyTXEDS.

About The Salvation Army Emergency Disaster Services:
“The Salvation Army, an international movement, is an evangelical part of the universal Christian church. Its message is based on the Bible. Its ministry is motivated by the love of God. Its mission is to preach the gospel of Jesus Christ and to meet human needs in His name without discrimination.” While every disaster is unique and creates its own special needs, the core of The Salvation Army's disaster program consists of several basic services. And while these services address many of the typical needs of a disaster survivor, Salvation Army disaster relief is also flexible. Our services are adapted to the specific needs of individuals and communities and scalable according to the magnitude of the disaster.