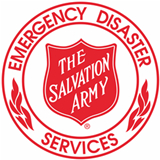 Hamilton, Ohio (March 17, 2016) - Residents of Hamilton Ohio, a small town North of Cincinnati had a recent near disaster after an natural gas line rupture.

Butler County Emergency Management contacted Major Bob Klenk, the EDS Coordinator for The Greater Cincinnati Area Command, and he and representatives from the area EDS team responded to assist the Hamilton Corps in the possible response. Once the initial assessment of the situation was completed, the Hamilton Corps was asked to stand up an emergency shelter to house residents from the estimated 150 homes effected by the accident. The local authorities didn’t anticipate more than 20 needing the service, but advised, that based on the weather and several other factors, this number may change.

While the situation never progressed to the point where the shelter or emergency services were needed, the local emergency management director, Matthew Haverkos stated, while referring to The Salvation Army, “There is no shortage of ways that your organization has helped our office respond and recover from incidents and disasters.” Haverkos added, “Emergency Management operations always require support and coordination. This is exponentially easier with great response partners such as The Salvation Army."