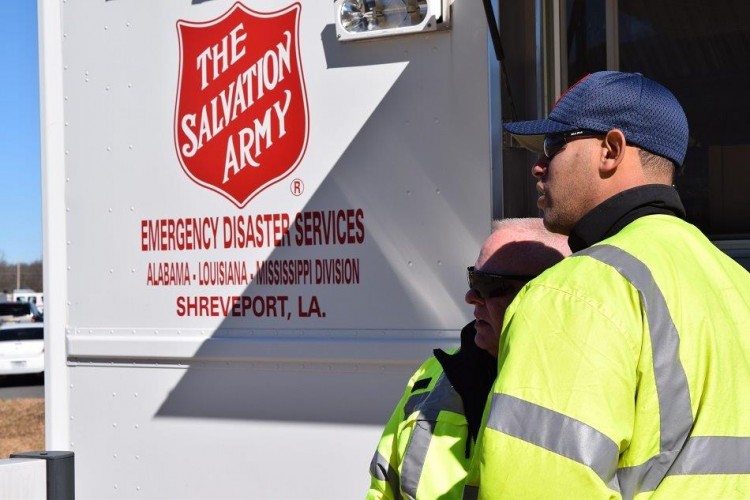 As severe weather looms over Alabama, Louisiana, and Mississippi The Salvation Army Disaster Services Division continues to support flood relief efforts in Louisiana and Mississippi. A severe weather front struck the areas beginning March 9, 2016 releasing record amounts of rainfall. Over 10,000 homes in Louisiana and approximately 1,800 homes in Mississippi flooded. The devastation was widespread impacting at least twenty-six parishes in Louisiana and twenty-seven counties in Mississippi. Fortunately, most areas are now transitioning to recovery. During this time, individuals, families and communities will continue to need support as the recovery phase will last for several more weeks.

Since the beginning of the disaster response The Salvation Army has served 8,770 meals, 10,045 drinks, and 7,537 snacks in the affected areas and handed out 2,494 clean-up kits. Other services provided have included the distribution of blankets, food boxes, water, baby items, and clothing.

“Many areas throughout Alabama, Louisiana, and Mississippi have been inundated with severe weather since December 2015. It seems we are preparing for or responding to a disaster event on a weekly basis.” says Terry Lightheart, Director of the Alabama, Louisiana and Mississippi Emergency Disaster Services Division. “Yet still, we are facing another severe weather front over the next several days which has the potential of aggravating some of the areas which are trying to recover from the recent flooding. However, we are ready to provide support as needed.”

To assist The Salvation Army in their ongoing disaster relief efforts, the public is encouraged to make a monetary donation by texting STORM to 51555, or by calling 1-800-SAL-ARMY, or online at http://give.salvationarmyusa.org/march2016floods.
Salvation Army disaster services are free. All people are served equally, without discrimination.