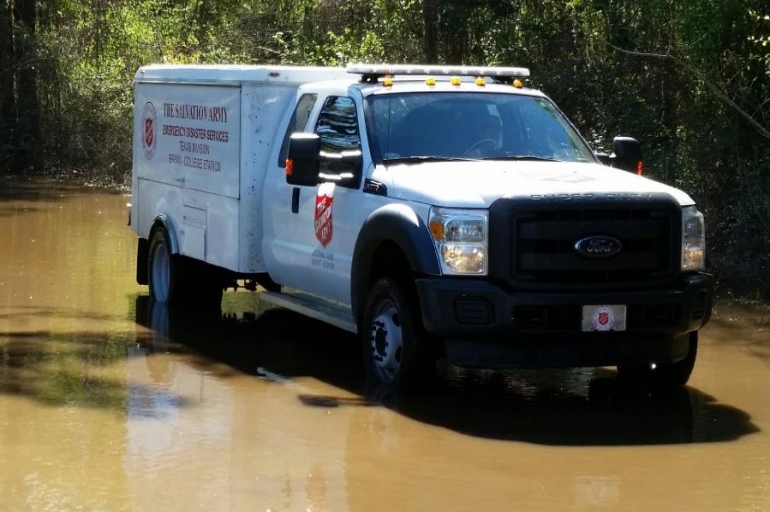 The disaster team from The Salvation Army Northwest Corps prepared and delivered sack lunches to the Greens Road area of the city. In the space of only 20 minutes more than 200 lunches were distributed. Later in the day 600 meals were served in Greenspoint and to a local juvenile detention center that had been impacted by flooding. The mobile kitchen and team from Conroe was deployed on Tuesday afternoon to provide additional support.

Residents of the Nob Hill apartment complex in Southwest Houston received dinner from the Pasadena Salvation Army mobile kitchen. Staff and volunteers served 200 meals and distributed 48 clean-up kits. Major Floiran Estrada spoke with one resident who explained that the water level reached 18 inches inside her apartment. This is the second time in the space of about 12 months that her apartment has been flooded and once again she has lost many of her belongings. Major Estrada was able to pray with the individual and will return to visit her again in the coming days.

400 clean-up kits were delivered on Tuesday and will be distributed by the Pasadena and Northwest Corps. As the response effort continues to grow two additional Salvation Army mobile kitchens have been called in to help and will be arriving on Wednesday.

Emergency Disaster Services staff from The Salvation Army arrived in Houston on Tuesday evening and will assess the situation over the coming days and direct the ongoing Salvation Army relief efforts.

“Our mobile kitchens were able to reach hundreds of people in need today, many who have been without power and whose homes have been flooded,” said Alvin Migues, Salvation Army Emergency Disaster Services Director for Texas. “With additional disaster units and personnel arriving on Wednesday we expect to be able to deliver meals, clean-up kits and support to even more people as the week continues. This is going to be a long and difficult clean-up and recovery process and The Salvation Army will be here to help.”

Donations to support the ongoing flood relief work of The Salvation Army in Houston can be made at http://tsatx.org/houstonfloods, or by calling 1-800-SAL-ARMY.