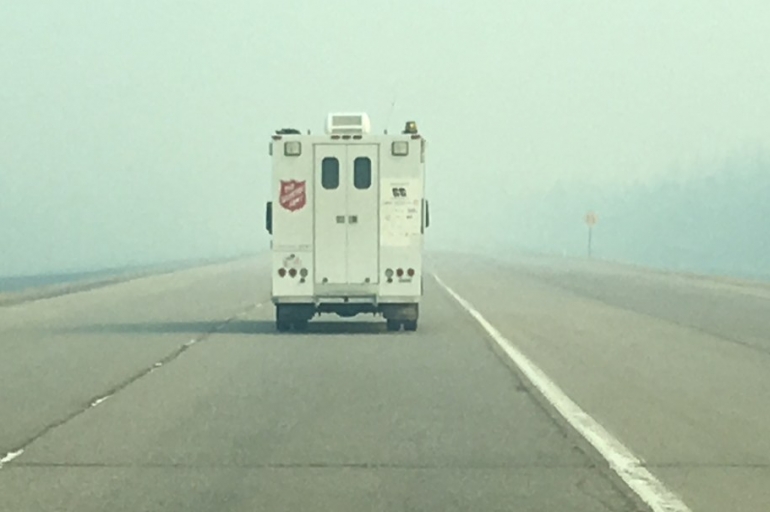 London  – A major emergency response is underway in Alberta, Canada, following wildfires that have led to the complete evacuation of the city of Fort McMurray – affecting nearly 90,000 residents and workers. The Salvation Army has deployed four community response vehicles to the scene and is supporting more than 1,100 firefighters, police officers and other emergency personnel with the provision of cold drinks, snacks and full meals.

The area affected by the fires covers some 850 square kilometres (328 square miles) and has led to at least 1,600 buildings being destroyed.

The Salvation Army’s established and well-rehearsed emergency protocols ensured that the international church and charity was ready to mobilise quickly after the fires began on Sunday 1 May. Teams are working closely with other agencies to determine how best to assist and to ensure that no needs go unmet. A dedicated disaster response team has been established at the Alberta and Northern Territories Divisional Headquarters in Edmonton in order to coordinate The Salvation Army’s ongoing response.

Before the fires intensified and led to a city-wide evacuation of Fort McMurray, The Salvation Army was providing food and water, clothing and hygiene packages to displaced residents. All Salvation Army officers and staff in Fort McMurray were safely evacuated, and additional personnel have been drafted in from elsewhere in Canada.

Divisional Commander Major Ron Cartmell explains that the emergency response will continue long after the fire is brought under control: ‘Once people can return home, The Salvation Army will be present to provide practical support as well as emotional and spiritual care.’

The best way for residents of the United States to support the efforts of The Salvation Army in Canada and help survivors of the wildfires is to make a financial donation, either by phone to 1-800-SAL-ARMY or online.