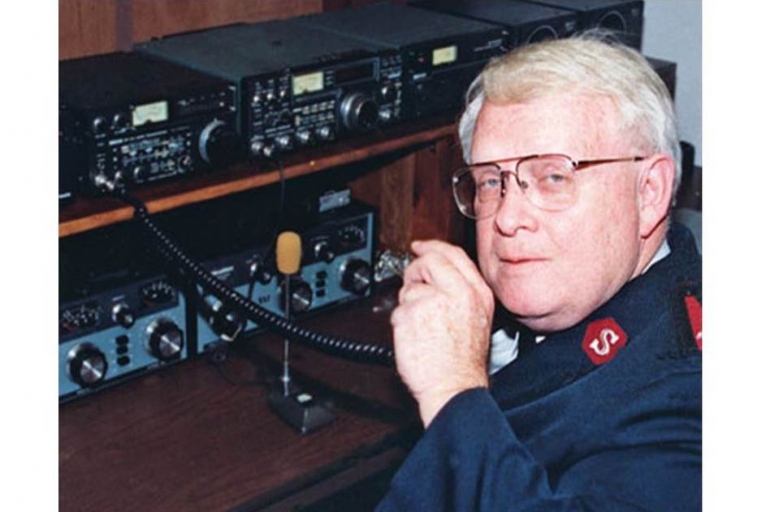 Salvation Army Team Emergency Radio Network (SATERN) Founder and past National Director Maj Patrick E. “Pat” McPherson, WW9E, of Coloma, Michigan, died on May 14 at Lakeland Medical Center in St Joseph, Michigan, where he’d been admitted on May 10 with breathing difficulties. After serving as SATERN Director for more than 23 years, McPherson, an ARRL member, stepped down 5 years ago. He founded the disaster response and relief arm in June 1988. SATERN became an official Salvation Army program in 1998, and McPherson was formally appointed as its national director.

Now an international organization, SATERN is dedicated to providing emergency communication and other assistance following disasters and emergencies and has responded to natural disasters, fires, and air crashes. After the September 11, 2001, attacks, SATERN volunteers were on duty in New York, Washington, and Pennsylvania. SATERN volunteers work in cooperation with other organizations, including ARES, in responding to emergencies and disasters. The SATERN Net meets weekdays on 14.265 MHz at 1500 UTC.

McPherson served the Salvation Army as the Heartland Division Disaster Coordinator  (Central Illinois and Eastern Iowa) for 2 years, and as the Disaster Services Director for The Salvation Army Metropolitan Division (Chicago and 11 surrounding counties) for 15 years.

“During my tenure in the Metropolitan Division, we were able to build a state-of-the-art disaster center, complete with a 60,000 square foot warehouse, docks, EOC, emergency conference area, training area, and communications, including amateur, commercial radio, satellite TV, and a sophisticated phone system,” McPherson recounted on his QRZ.com profile.

He had served earlier in non-disaster-related roles for The Salvation Army in Kankakee, Pekin, and Springfield, Illinois; Oskosh, Wisconsin; Marquette, Midland, and Flint, Michigan, and Dubuque, Iowa.

McPherson said he got into Amateur Radio as a way to stay in touch with family and friends throughout his various transfers around the Midwest. His wife, Carmella, is KB9YSQ, and his brother Larry is KA0QEO. He was also active in ARES, RACES, and SKYWARN. He was especially fond of operating CW. “It represents to me a challenge through the unknown, accomplished because I was motivated to become an Amateur Radio operator,” he said in his profile. “With retirement, I can now focus on the SATERN program, run CW from the field, and enjoy all of the friends made through the years via Amateur Radio.”