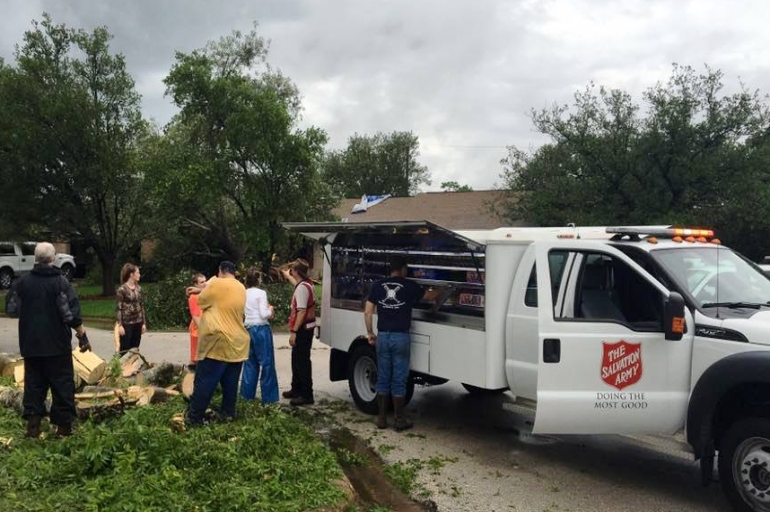 Dallas, Texas (May 29, 2016) – Intense storms have resulted in damaging tornadoes, heavy rain and yet more flooding affecting numerous communities in Texas over the Memorial weekend. The Salvation Army has mobilized disaster teams to provide relief, basic necessities, and emotional and spiritual care to affected communities.

As of Sunday morning, May 29, 17 counties and multiple cities in Texas were experiencing moderate to major flooding. The Texas Division is currently supporting response operations in Bryan, Conroe and Brenham, and Salvation Army staff is manning the State Operations Center which is at Level 3 - Increased Readiness Conditions. As flood waters rise in the coming 24-48 hours it is expected that additional support and response will be required in the Houston area, in Freeport where 700-800 homes are estimated to be affected, and in several Service Extension Unit areas.

Disaster volunteer Dwayne Walters is the coordinator of The Salvation Army Bryan College Station disaster response team. Dwayne and his wife, Diane, have already been deployed for several weeks since January this year, serving tirelessly during disaster events in Dallas, East Texas, Austin, and El Paso. On Thursday afternoon the Walters’ home town of Bryan was hit by a tornado and around 30 houses were affected along with significant flooding in the city. “By Thursday evening we deployed the Rapid Response Unit and were providing roving assistance in the impacted areas,” said Dwayne. “Our team consists of Advisory Board members, volunteers, and young people from the Corps and it is a privilege to be serving people from our own community. We will be out here as long as these folks need our help.”

The Salvation Army has been called upon to respond to an unusually high number of disaster events in Texas over the last 12 months, providing more than:

The Emergency Disaster Services team in the Texas Division will be carefully watching the weather in the coming days and several additional units are on stand-by and are prepared to respond if necessary.