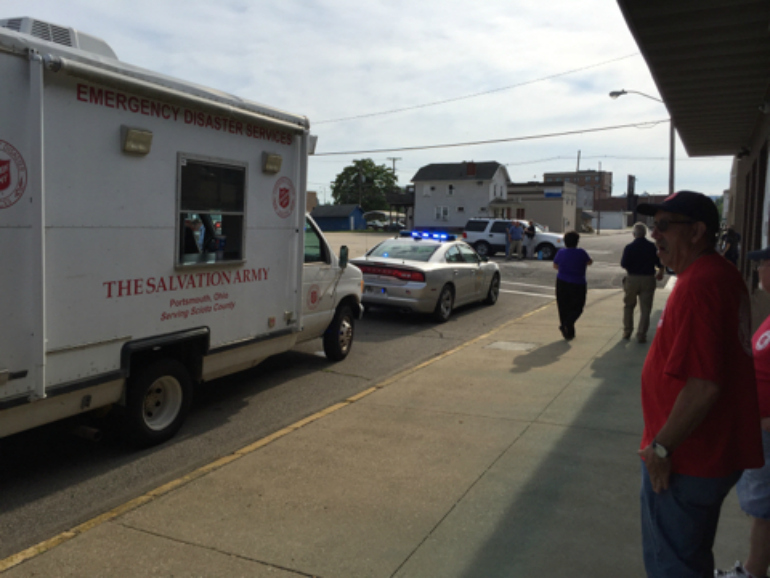 Portsmouth, OH (May 31, 2016) – The Portsmouth Salvation Army spent most of yesterday afternoon and evening supporting first responders after an explosive device was suspected in a downtown vehicle.

According to news reports, a police chase that stretched across two states ended Tuesday afternoon in Portsmouth Ohio, with the arrest of three individuals.  According to information received from partner agencies in Kentucky, the Portsmouth Police Chief had reason to believe that there was an explosive device in the vehicle and ordered the shut down and evacuation of several city blocks until it could be checked.  The area remained quarentened until late Tuesday evening when the Columbus Ohio Bomb Squad gave the all clear.  No explosive materials were located in the vehicle.

Emergency Disaster Services Volunteers and Salvation Army officer, Lt. Jeremiah Eisley responded to assist, setting up their canteen near the operations center at Shawnee State University.  During their time on scene, The Salvation Army distributed over 100 waters and sandwiches to multiple response groups, some coming as far as Columbus, 2 hours away.  One indvidual receving a drink stated "This work is so hard, but having The Salvation Army here makes it a little bit easier."  Lt. Eisley added, “We are called to be the hands and feet of Jesus, and this is what we are trying to do in Portsmouth and across Southern Ohio.