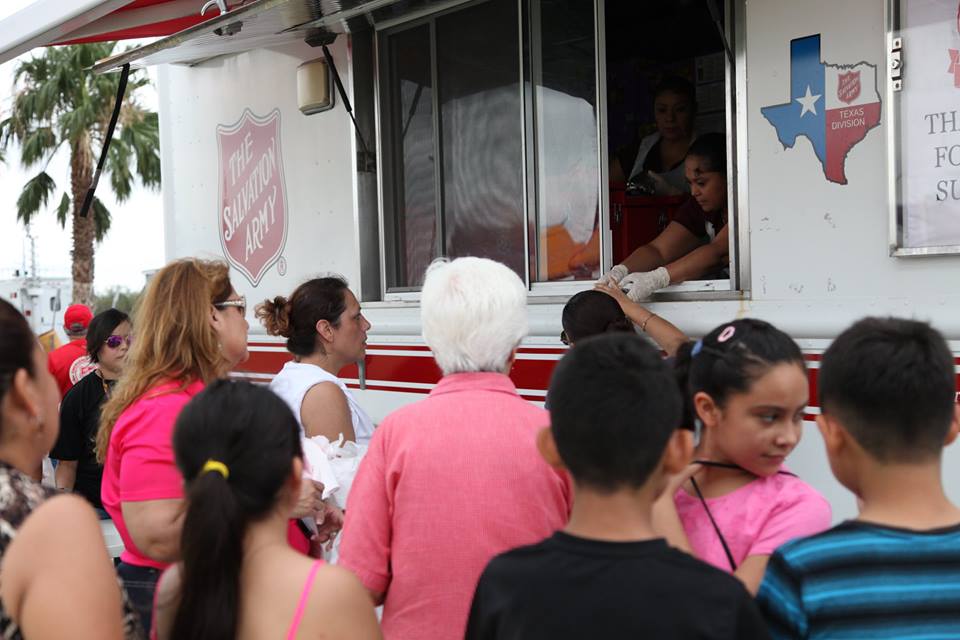 Dallas, TX (June 8, 2016) – The Salvation Army in Texas continues to provide widespread practical assistance following flooding in and around the state, particularly in Brazoria, Fort Bend, and Montgomery Counties.

Eight Salvation Army disaster teams operating mobile kitchens are working around the clock to deliver much needed meals, drinks, cleaning supplies, and encouragement to those affected by flooding. Trained disaster crews have traveled from as far as Plainview, San Angelo, and Austin, to provide support to the work being done by local Salvation Army teams from the Houston area.

“We continue to see conditions improving in most areas of the state but there are still areas of concern along the Brazos River,” said Alvin Migues, Emergency Disaster Services Director, for The Salvation Army in Texas. “We are monitoring the situation and responding in communities that are just now seeing the water starting to recede.”

Several national and local partners have come forward to provide much needed support to the ongoing response effort. Target has generously donated $100,000 in Target GiftCards to be distributed by The Salvation Army in the hardest hit areas and Walmart has provided supplies and food in various cities. AmeriCares, an emergency response and global health organization, have donated four truckloads of bottled water, given by Nestlé Waters North America, and comfort kits that have arrived in Southeast Texas for families in need. Mercy Chefs, a Virginia based non-profit, disaster relief organization has deployed their team of professional chefs to feed survivors and first responders. Additionally, local partnerships from companies including H-E-B, Chick-fil-A, and Boys & Girls Club, and have provided meals and much needed volunteers.

The Salvation Army of Freeport is coordinating response efforts with three mobile kitchens, a field kitchen operated by Mercy Chefs, and one Rapid Response Unit (RRU) to provide feeding and hydration to first responders and residents. Distribution of clean-up kits, food boxes and hygiene kits is ongoing and 10 tents were provided for DPS check points.

The Salvation Army is serving meals at the following locations:

The Salvation Army is also providing roving services in the housing subdivisions of Holiday Lakes, W. Columbia and Angleton.

The Salvation Army Houston Area Command is operating three mobile feeding units and a RRU and is currently serving in the following locations:

The Salvation Army Pasadena Corps continues to respond with food, hydration, emotional and spiritual care as well as distribution of cleaning supplies, hygiene products and household food boxes to those in the Kingwood area.

At the request of the City of Mission, The Salvation Army in McAllen has been feeding first responders and residents in neighborhoods damaged by recent storms. This proved to be a community effort as the local H-E-B donated food, snacks and drinks, and even delivered ready-made lunch bags, while volunteers from the Boys & Girls Club helped prepare food in the Corps kitchen and served on the mobile kitchen along with Salvation Army staff and volunteers.

All Salvation Army units across the division have been briefed of the current situation and have been placed on increased readiness.

Total assistance provided since May 28:

Donations to support the ongoing Salvation Army response efforts can be made by calling 1-800-SAL-ARMY, or online at http://tsatx.org/TX_Floods