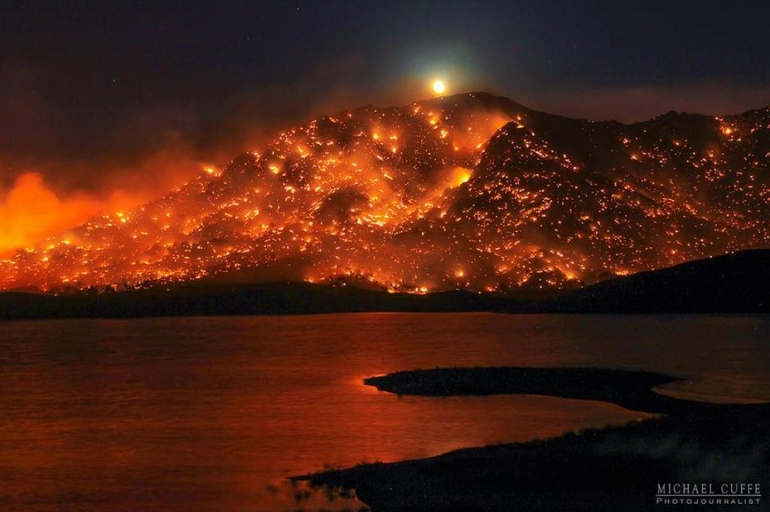 LAKE ISABELLA, CA (June 24, 2016):  The Salvation Army is actively responding to the Erskine Fire, a major wildfire in North Eastern Kern County that -- to date -- has burned more than 20,000 acres, destroying 100 structures and prompting the evacuation of more than 2,000 people.  Salvation Army volunteers from the local Lake Isabella service unit are currently working alongside Red Cross personnel to provide meals to the 140 individuals who have taken refuge in the Red Cross shelter that was established overnight in nearby Kernville.

Three Salvation Army Canteens (mobile kitchens, about the size of a parcel delivery truck) and volunteer teams have deployed from Bakersfield, Modesto and San Francisco to help with meal preparation and service for individuals in the shelter, and for other evacuees and first responder personnel as needed.  In addition, a trained team of Salvation Army volunteers is in route from Ridgecrest to lend support as needed to shelters and evacuation centers, with additional teams from around the Mojave Desert on standby.

"Our thoughts are with the communities affected by this fast burning fire, as well as the fire fighters working in dangerous conditions to protect people and their property," said John McKnight, Director of Emergency and Disaster Services for The Salvation Army's Golden State Division. "Our teams are prepared to provide both nourishment and emotional care to those who are undoubtedly shaken by this frightening event."

The Erskine Fire as a brush fire late Thursday afternoon, just south of California Highway 178 near Lake Isabella.  In just 18 hours, the fire had spread to 20 square miles.  Its estimated that more than 600 firefighters are on scene now, with that number expected to approach 1,000 by the weekend.  As of 1:00pm, the fire was 0% contained.

Salvation Army canteens are expected to arrive by this evening, and will take over feeding operations tomorrow morning.

How people can help:
An appeal is being made for financial assistance to fund the relief work in Kern County.  Those who wish to support The Salvation Army’s disaster response may do so by sending a check earmarked “Kern County Wildfires”  to their local Salvation Army office, online at http://bit.ly/28WUcUh, or by making a credit card donation at 1-800-SAL-ARMY.  Be sure to designate the donation for the “Kern County Wildfires.”

Although The Salvation Army is not requesting in-kind goods donations at this time, gifts of gently-used household goods, clothing, etc., are always needed by Salvation Army Family Stores to support their work in the local community. Find out more at SAtruck.org.