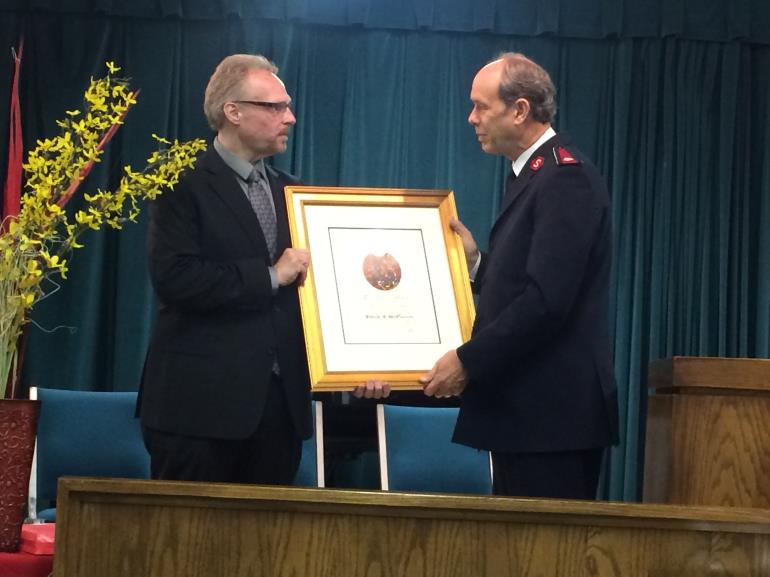 The presentation was made during the Holiness Meeting at the McPhersons’ home Corps (church) in Benton Harbor, MI.  The reward was accepted on behalf of his father and the McPherson family by McPherson’s son, Sean McPherson.

National SATERN Liaison Bill Feist, WB8BZH, presented the family with two Remembrance Books signed at the Dayton Hamvention by many of the attendees as well as a letter from the American Radio Relay League (ARRL) and a copy of the ARRL Public Service Handbook signed by over 60 members of the ARRL staff.  It contained an article by Maj. McPherson

The prestigious Certificate in Recognition of Exceptional Service is awarded by the USA National Commander of The Salvation Army to individuals who “are considered to be outstanding and distinguished by an unusual or significant achievement in or for The Salvation Army.  They must be a person of high moral character and integrity who has demonstrated a compassionate response to human need.”

Maj. McPherson founded the Salvation Army Team Emergency Radio Network or SATERN in June 1988, with one other U.S. and two Canadian amateur radio operators.  A scant 2 months after it was founded, SATERN became a critical international communications link between the U.S. and Jamaica following Hurricane Gilbert that killed 341 people and left thousands homeless and in need of assistance throughout the Caribbean.

From that meager beginning, SATERN grew into an international network of over 4,300 volunteers in North America and more volunteers internationally.  SATERN was made an officially recognized part of The Salvation Army Emergency Disaster Services in 1998 with Maj. McPheson as National SATERN Director.  He remained in that position until his retirement in 2009.  He also served as interim National SATERN Coordinator for a brief time in 2014-2015.

Major McPherson was unexpectedly Promoted To Glory on Saturday, May 14, 2016, at the age of 70.