The Salvation Army Continues to Support Evacuees of Erskine Fire 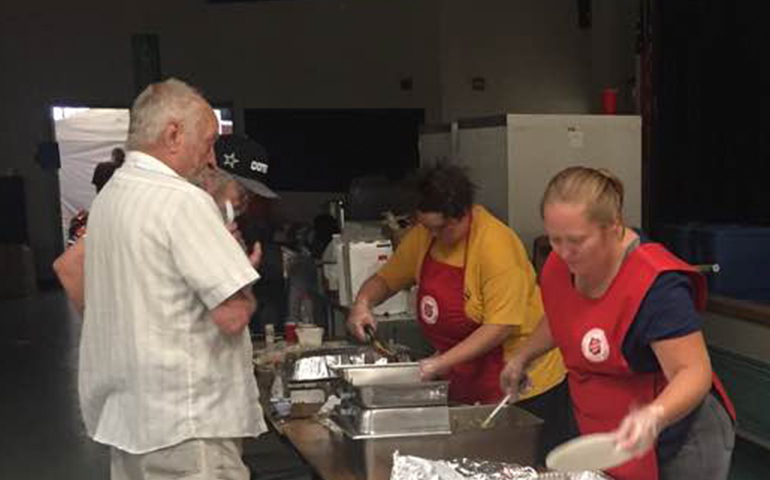 KERNVILLE, CA (June 27, 2016):  The Salvation Army continues to serve the evacuees of the Erskine Fire by providing meals, hydration and emotional care at the shelter / evacuation center stationed at Kernville Elementary School.  Currently, the shelter is housing 75 people, though an average of 200 to 300 people are served during each mealtime, as many evacuated individuals have found temporary accommodations, but continue to visit the center for meals and fellowship.

Approximately 1,600 meals were served over the weekend to fire survivors, thanks in large part to teamwork between Salvation Army volunteers and generous community donors.  Lunches, dinners and snacks have been supported by local restaurants and clubs from around Kern County. In particular, Kern River Brewing Company, the local club of the Sikh Riders of America, The Sandu Family, McNalley’s Fairview Lodge, The Ridge Project, and Michalangelo’s Pizza – among others -- have stepped to supplement The Salvation Army’s efforts and provide both nourishing and comforting meals to those affected by the disaster.  In addition, the local companies have been extremely generous with donations of bottled water, barbeque equipment, propane, etc., to keep food preparation and serving operations working as smoothly as possible.

“We’re just amazed at the endless amount of compassionate generosity the people of Kern County have shown for its neighbors,” said John McKnight, Director of Emergency and Disaster Services for The Salvation Army’s Golden State Division.  “We’re are so blessed to have an army of supporters to help us care for all of the communities affected by the fire.”

The Erskine Fire began as a brush fire late Thursday night, just south of California Highway 178 near Lake Isabella.  As of 12:00pm today (June 27), the fire had grown to more than 45,000 acres and was only 40% contained.  Today, evacuation orders are being lifted for some of the affected communities, though two are known to be without power.  Its estimated the remaining communities will remain under evacuation orders for a few more days.

The Salvation Army will continue meal service as long as the shelter/ evacuation center remains open and is prepared to provide emotional care to survivors as they return to their neighborhoods and learn the fate of their homes and communities. The support team serving evacuees includes trained Salvation Army disaster response volunteers from Tehachapi, Lake Isabella, Ridgecrest, Bakersfield, Modesto and San Francisco.

Photos of The Salvation Army's response can be found online: https://www.flickr.com/photos/salvationarmysf/albums/72157669312691230

How people can help:
An appeal is being made for financial assistance to fund the relief work in Kern County.  Those who wish to support The Salvation Army’s disaster response may do so by sending a check earmarked “Kern County Wildfire”  to their local Salvation Army office, by donating online at http://salar.my/kerncountyfires or by making a credit card donation at 1-800-SAL-ARMY.  Be sure to designate the donation for the “Kern County Wildfires.”

In-kind donations of clothing and household goods are not needed at the evacuation center.  Although The Salvation Army is not requesting in-kind goods donations at this time, gifts of gently used household goods, clothing, etc., are always needed by Salvation Army Family Stores to support their work in the local community. Find out more at www.satruck.com.