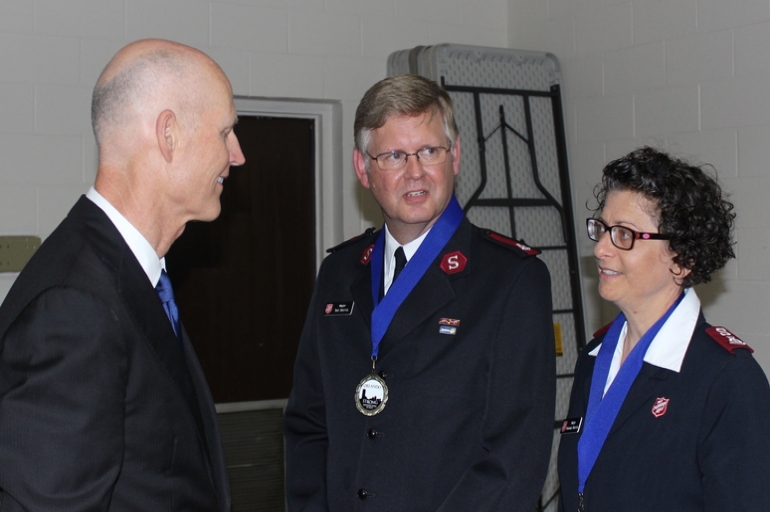 “My job here is to tell you thank you,” Scott told the crowd of more than 40 volunteers.

Scott presented each volunteer with the Governor’s Medal of Unity.

“This says ‘Orlando Strong’,” Scott said. “Hopefully we will continue to be unified.”

The Salvation Army Orlando Area Command served survivors and first responders in the aftermath of the mass shooting that killed 49 people near downtown Orlando on June 12.

The Salvation Army was inside the police perimeter and was able to provide first responders with water, meals and snacks.  Drinks and snacks were also provided just outside the Family Assistance Center as well as during one of the many vigils which took place at the Dr. Philips Preforming Arts Center.

Along with serving first responders, The Salvation Army also worked with partner agencies to support the city of Orlando’s “one-stop” Family Assistance Center which was located at Camping World stadium.

Major Ted Morris, Area Commander for The Salvation Army in Orlando, said it was heart-warming to see the governor with the volunteers.

“We were honored to host the Governor this afternoon and to see members of our team recognized for their sacrificial service,” he said.

Directly after the shooting, Morris said people wanted to “do something.”

“In the wake of this tragedy, and The Salvation Army, in partnership with a number of food providers, was in a unique place to be able to do so,” Morris said.  “As the investigation phase of the operation progressed, we saw how important the Ministry of Presence was to the authorities.”