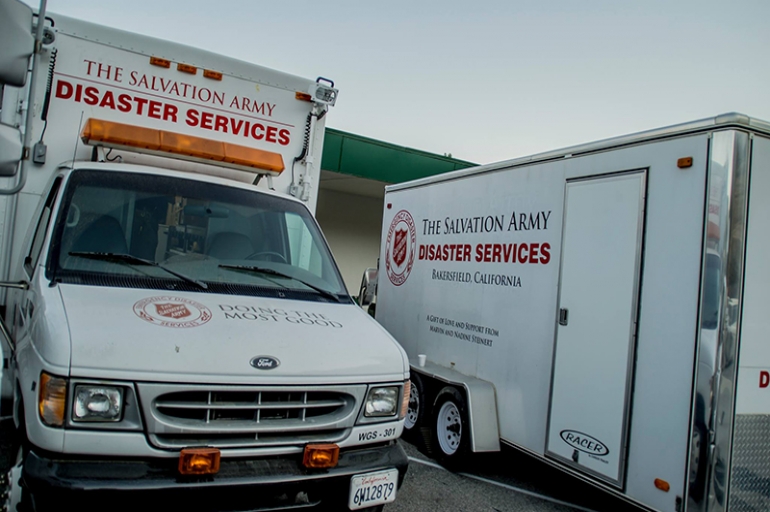 KERNVILLE, CA (June 30, 2016):  The Salvation Army continues to provide care to the survivors of the massive Erskine Fire, a swift-moving blaze that has destroyed 285 homes and burned 46,684 acres of North Eastern Kern County.

Yesterday was the first day fire suppression was secure enough for The Salvation Army’s canteens (mobile kitchens) to visit some of the burned communities.  Volunteers provided lunches, cold water and emotional care to survivors as they returned to their neighborhoods for the first time to survey damage.  Canteen service will continue tomorrow and into the weekend, as needed.

Since its response began on June 23, The Salvation Army has provided 3,458 meals and 2,245 snacks to evacuees at the two Red Cross –operated shelters & evacuation centers (Kernville Elementary School in Kernville and St. Jude’s Catholic Church in Wofford Heights). More than 600 hours of volunteer support have been contributed to the effort by trained Salvation Army disaster response volunteers from Tehachapi, Lake Isabella, Ridgecrest, Bakersfield, Modesto, Hanford, Hollister, and San Francisco.

A new team of volunteers will arrive on Monday to provide relief to crews that have been serving all week. To date, the shelters are scheduled to remain open until further notice, which continue to host 90+ individuals overnight and 180 survivors during each meal.

“Though the size of the fire is diminishing, the scope of need is not,” said John McKnight, Director of Emergency and Disaster Services for The Salvation Army, Golden State Division.  “The Salvation Army plans to continue its presence to be a source of aid and encouragement as survivors learn the fate of their homes and prepare to rebuild their towns, their neighborhoods, and their lives.”

Photos of The Salvation Army’s Erskine Fire response can be found online: https://flic.kr/s/aHskBEQhbs

Although The Salvation Army is not requesting in-kind goods donations at this time, gifts of gently-used household goods, clothing, etc., are always needed by Salvation Army Family Stores to support their work in the local community. Find out more at www.satruck.com.