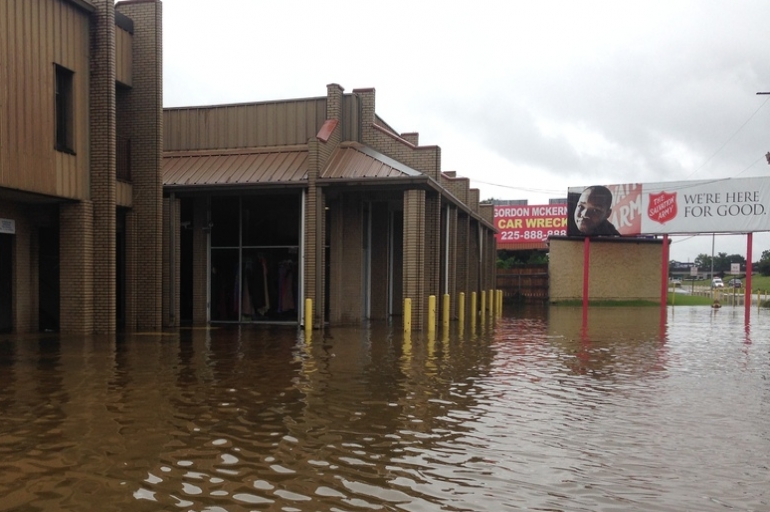 Baton Rouge, LA - The record rainfall over the last two days in Southeast Louisiana and South Mississippi causing roads to be closed and mandatory evacuations in several communities has not spared the Baton Rouge Salvation Army facilities.

“We were able to move our vehicles off our property and to high ground, but unfortunately our facilities including our shelter and administration building has flooded,” said Captain Brett Meredith, Baton Rouge Salvation Army Corps Officer.

He adds the local area around the Corps was hit with twenty inches of rain and more is expected overnight.

“It is unfortunate that our facilites have been affected by the flood waters, but I know we have lots of prayers being lifted up for us, and this situation will not prevent us from continuing to support the community during and after this event,” said Captain Meredith.

“The interstate and highways in some areas have closed for now, limiting access to many areas. But we have resources on standby ready to respond as soon as the water recedes,” said Terry Lightheart, The Salvation Army Divisonal Director of Emergency Disaster Services.

Resources are being deployed into the affected areas from Biloxi, Jackson, and Hattiesburg, Mississippi, as well as New Orleans, Shreveport and Alexandria, Louisiana. The Salvation Army also has a disaster liaison stationed at the local emergency management in Baton Rouge and with the Louisiana Governors Offie of Homeland Security and Emergency Management to maintain situational awareness.

To help those in these flooded areas across Southeast Louisiana, you can donate by going to http://give.salvationarmyusa.org/gulf_coast_floods. You will also find information on this webpage on how to donate by phone and through mail.