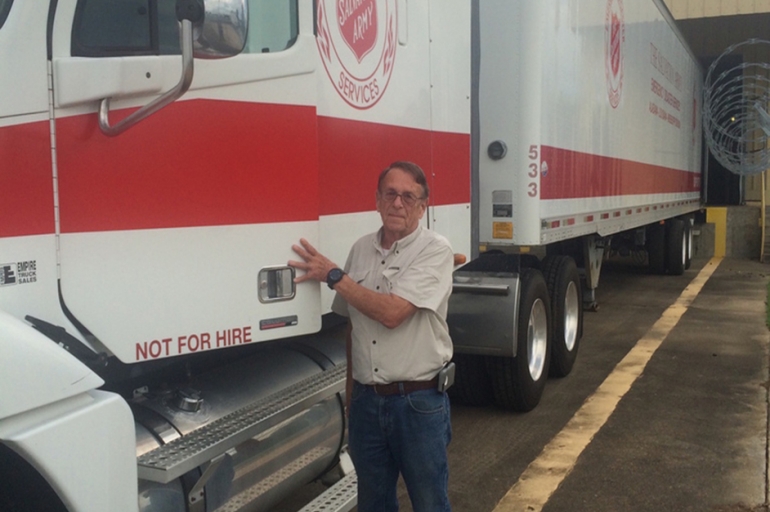 Sam Laffoon tried to retire once. He worked in construction and drove a school bus for years. Sam also was a servant. He worked for the Mississippi Baptist Convention helping those in need.

“I met Bill Feist (disaster liaison for Salvation Army) at a training several years ago and we got to talking,” said Laffoon. “One thing led to another and he tells me The Salvation Army was having a hard time keeping a certified truck driver. The Mississippi Baptists said they didn’t mind if I drove for The Salvation Army since the two groups are in a partnership.”

Over the last few years, Sam has dropped off resources as far away as Tampa, Florida and Atlanta, Georgia or as is the case this week, in Baton Rouge, Louisiana.

“I have met so many super, super Christian people in The Salvation Army and really enjoy working with them,” said Laffoon.

Plus, it turns out Sam can relate to some of the folks he serves in these disasters.

“It is a real treasure for me to witness to them because my wife and I were dead broke. Through our faith, we worked through that crisis, and we got back up on our feet,” said Laffoon.

Last November, Laffoon’s wife died after a short battle with cancer. He says she was the one who first told him to find a part time job after he retired the first time, and that “part time” job helps him make a difference.

“It gives me something to do in my spare time, and helps me keep my faith in the forefront,” said Laffoon.

To help those in these flooded areas across Southeast Louisiana, you can donate by going to http://give.salvationarmyusa.org/gulf_coast_floods. You will also find information on this webpage on how to donate by phone and through mail. You can also text STORM to 51555 on your mobile device.