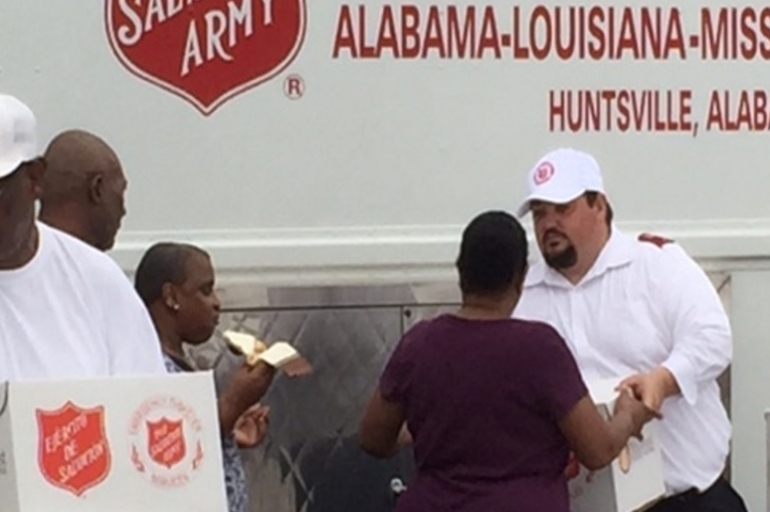 Lafayette, LA - The Salvation Army in Greater Lafayette held a Local community event Saturday, August 27, 2016 at the Northgate Mall in Lafayette. The Community Assistance Day event was a show of common cause to support those affected by the recent floods. “The day was a great success”, said Major Alan Philips, Incident Commander for The Salvation Army Disaster Relief efforts in Lafayette. “We had involvement from The Salvation Army, FEMA, the American Red Cross, Cajun Cross, and a number of other local supporters”. “Local businesses donated items to help in the event”, Philips said.

Over 1500 people showed up for the event that took place at the Northgate Mall. The Salvation Army distributed food boxes to over 540 families on Saturday and gave out over 6 pallets of water. The Salvation Army Disaster Canteens, mobile feeding kitchens, distributed over 500 hot meals and over 200 snacks to the crowd that showed up for the event. “It was a real success”, said Phillips. “The Red Cross distributed two truckloads of cleaning supplies, and Cajun Cross gave out personal hygiene items, diapers, pillows and blankets, as well as other personal care items”, Philips commented. “It was a great show of common interest to have all the agencies working together in one location to help those who have been so terribly afflicted by the disaster”, said Philips. “FEMA was able to register families who needed their help as well, so all in all it was a good day”.

Major Cheryl Philips, the Emotional and Spiritual Care Officer for the Incident Command Team said, “It was really a great opportunity for us to connect with the families and offer them something more than just some food or cleaning supplies, but it also gave us a chance to serve their greater needs by giving them hope and praying with them”. Major Cheryl Philips and Majors Mel and Esther James, the local Salvation Army Commanding Officers, took the time to pray with many of those who came to receive assistance. “It’s important that The Salvation Army give something besides just a box of food, because the greater need of these individuals is for them to know that they are loved and that we care and that we are available for them”, Major Cheryl Philips said. “During this time when they have lost so much is when they need to know the most that God loves them and He is there for them as well”, she said.

Sunday, The Salvation Army will have a distribution of food boxes as well as serving hot meals in the Abbeville area at the Super 1 Foods Parking lot. Mobile Salvation Army Canteens have been roaming the outer areas of Greater Lafayette, like Abbeville, St. Martinville, Crowley, and other areas. “We still continue to see the needs grow as more people are able to get into their homes as the waters continue to recede”, said Major Alan Philips. “We want people to know The Salvation Army is here in their community and will do what they can to help as the area begins the long task of recovery very soon”, Philips commented.

Currently, the local Salvation Army is working on its plans to handle the long term recovery process and will release that information as the recovery phase begins soon.

The Salvation Army has been performing disaster relief in the area since Friday, August 19, 2016. Since the start if relief efforts, The Salvation Army Emergency Disaster Services have served over 6,600 meals to disaster victims. “We anticipate The Salvation Army will be assisting residents who have been affected by the flooding for the next several months,” Philips said.