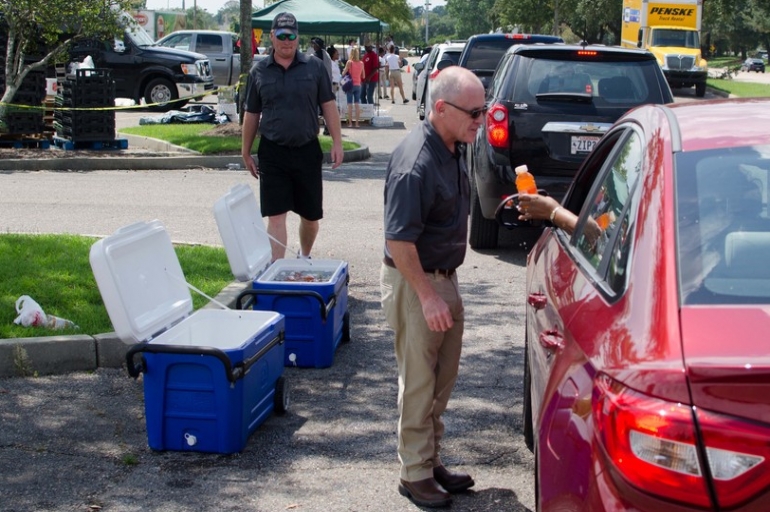 Baton Rouge, LA - If you are an officer, employee or long time volunteer of The Salvation Army, you’ve heard it said many times, “I thought The Salvation Army only did Christmas and thrift stores.” Take that person, who only knows those programs, on a tour of one of our campuses anywhere in the world. The reaction is the same.

That reaction was the same for Dan Rosado when he toured Salvation Army facilities in the Chicago area, but Mr. Rosado got the added bonus of a visit to the local Salvation Army summer camp. He got to see first-hand what takes place at The Salvation Army, plus the smiles on the faces of so many children experiencing God’s creation by attending camp for free.

When the opportunity came to help in south Louisiana following the historic flooding, Rosado, the Vice President for Sales and Marketing at Sqwincher (http://sqwincher.com/) Hydrating Drinks, knew The Salvation Army in Baton Rouge would be on the front lines helping those who needed it the most.

Sqwincher donated 47 pallets of hydrating drinks and other products to The Salvation Army's relief effort in Baton Rouge. Sqwincher drink products both hydrate and replace critical nutrients a person loses during hard work in extreme heat -- conditions that are, unfortunately, all too common around Baton Rouge as residents gut their flood damaged homes in heat that on most days exceeds 100 degrees.  By distributing the Sqwincher drinks, The Salvation Army hopes to help protect flood survivors  from the danger of dehydration and heat exhaustion.

Not content to sit on the sidelines, Sqwincher even went as far as having a couple of their employee’s set up on The Salvation Army's distribution line, handing out cold drinks to people in their cars as they were waiting in line.

We got to see the true heart of Sqwincher this week.

We cannot thank them enough for their support!