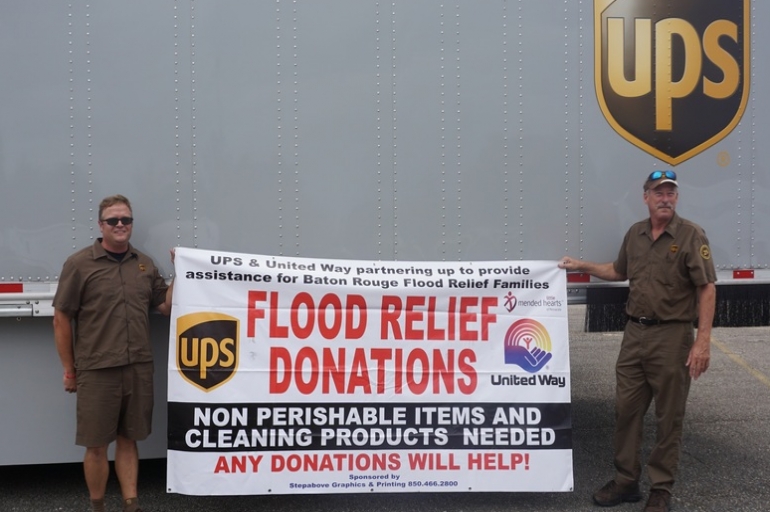 Baton Rouge, LA  – Billy Plybon, eight year UPS employee out of Pensacola, Florida saw countless news stories regarding the recent devastation in Louisiana caused by the Gulf Coast Flood of 2016. He approached his supervisor to find out if his company, UPS, would be willing to help. The next day, co-workers came to work arms full of items to send to Baton Rouge, Louisiana. Plybon, knowing his community, thought if he reached out, the donations would double. Soon the company developed a donation event called, “Brown Up Louisiana!” The crew stationed a trailer at a local mall one Saturday morning (August 27) and filled it up in hours. Plybon was also contacted by a representative from Winfrew Casino who wanted to see how they could help. A second trailer was filled with donated supplies because of this and other concerned community businesses.

Plybon, along with Frank Parsins, driver for UPS, transported the packed UPS trailers to The Salvation Army Distribution Center in Baton Rouge. The trailers were delivered Monday afternoon. The donations included water, cleaning supplies, clothing, and dog food. These items will be given to those affected by the recent flooding to help them rebuild and regain hope.

When reminiscing on the process, Plybon remarked, “This could have easily been us… It was so cool to see how the community came together. This is what we were put on this earth to do. We hope that just a little bit of love from us can change someone’s life.”

When asked about UPS’s involvement in the relief effort, Parsins responded saying, “It’s BIG! To have your company back you up and stand behind us. I’m just so proud to wear the Brown! I’m glad we could help.”

The Salvation Army would like to thank UPS for reaching out and taking action to help those affected by the Gulf Coast Flood of 2016. Together, we truly are “Doing The Most Good!”