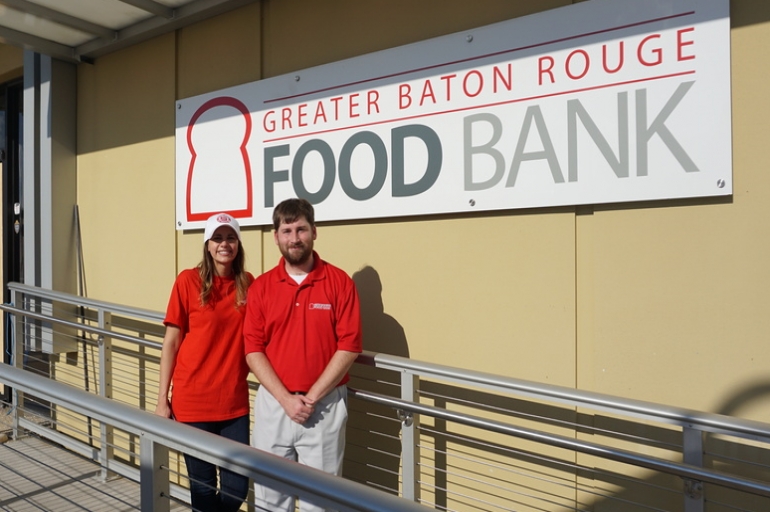 Walking through the skeleton of a building that once was the headquarters of The Greater Baton Rouge Food Bank, James McGowan, Director of Development and Philantrophy, describes how the flood waters rose in a matter of hours.

“We left the facility around 6 p.m. on Saturday (August 6) evening and we were high and dry. Our president and myself returned at 9 p.m. that same night and discovered three to four feet of water in the facility. It was a flash flood overnight,” said McGowan

The 170,000 square foot building has served as Headquarters over the past three years and has never seen flooding of this magnitude.

However; through adversity and teamwork, both of the organizations overcame the damange and began serving the community immediately after the rains stopped. The Greater Baton Rouge Food Bank has supplied The Salvation Army Disaster Relief Distribution Center at the Cortana Mall over the last few weeks with food and water to serve to the disaster survivors.

“They (The Greater Baton Rouge Food Bank) have been very essential in this disaster; without their supplies and support, we would not have been able to provide supplies to as many disaster survivors as we have thus far,” said Jessica Bettinger, National Emergency Disaster Services & Government Relations Program Specialist.

With the support of The Greater Baton Rouge Food Bank and other community supporters, the Salvation Army has provided over 128,000 meals to those affected by flooding in and around Baton Rouge.

By overcoming obstacles, rebuilding facilities and serving the community, we truly are, “Doing The Most Good.”