The Salvation Army Preparing for Response to Tropical Storm Hermine 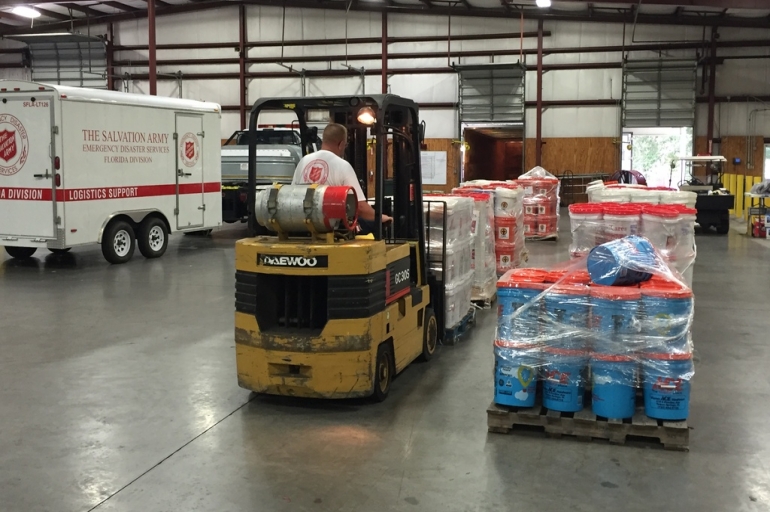 Tampa Bay, FL (September 1, 2016) –  While Hermine swirls through the Gulf of Mexico, Salvation Army staff and volunteers are in the Army's 50,000 sq. ft. state Emergency Disaster Warehouse preparing  supplies, mobile feeding and shower units to be deployed locally and throughout the state as needed. Depending on the forecast teams are on stand-by to respond as early as tomorrow (Friday) afternoon.

Currently in Hillsborough and Pinellas County, The Salvation Army has personnel in their respective Emergency Operation Centers (EOC) monitoring the storm and the Army's needed response. The Salvation Army's  trained, dedicated staff and volunteers are prepared to serve food and drinks and provide emotional and spiritual care in the immediate if called upon. Because The Salvation Army has a long history of response in disaster situations – large and small – a net of trained personnel and response vehicles (mobile feeding units) designed for rapid and free-standing response are ready to be deployed.

“With the heavy rains yesterday the Army's homeless shelters in Hillsborough and Pinellas quickly adapted our operations to allow for extended daytime hours and to offer more beds in the evening ,” said Captain Andy Miller, Area Commander for The Salvation Army, Tampa/Hillsborough County. Captain Miller noted that the extended hours and extra beds - 54 in Hillsborough and 30 Pinellas - will be available throughout the storm. For more information or to donate please visit www.salvationarmytampabay.org.

Earlier this summer The Salvation Army responded to flooded communities in Upper Pinellas County following Tropical Storm Colin providing meals.  In the wake of the tragic shootings at the Pulse Nightclub in Orlando, a Salvation Army team from Tampa Bay was called to support the Army’s response efforts to first responders.

For more information on The Salvation Army’s preparations to Tropical Storm Hermine please visit http://disaster.salvationarmyusa.org/ and to volunteer in your community visit www.SalvationArmyTampaBay.org.