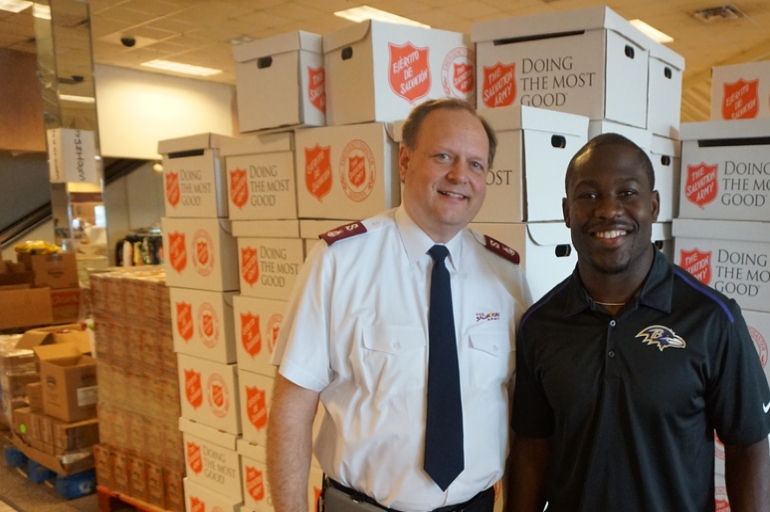 JACKSON, MS – The Salvation Army is an organization made up of staff members, volunteers, donors from all over the world working together for one common goal: to show the love of Christ through the service of others. The Army is stronger because of the diverse make up of its members and supporters. During times of disaster relief, this strength is truly shown.

Over the past month, businesses, organizations and individuals have reached out to The Salvation Army to see how they can do their part in the relief effort. Yesterday, The Salvation Army Disaster Relief Distribution Center was visited by Baltimore Ravens’ Running Back, Justin Forsett. Forsett made a generous donation to the Flood Relief Effort in Louisiana and even donated product from his company, ShowerPill.

Forsett arrived at Cortana Mall in Baton Rouge, LA at 9:30 on Thursday morning (September 1). He toured the facility with Major Stephen Morris as well as “shopped” in our Distribution Center for a local woman in need. He spoke with us about his experience and why he felt it was important to give back during times of disaster.

“I was put on this earth for more than just football; I’m a husband, a community member and I’m here to do God’s work. It’s important for us to be here for one another,” explained Forsett.

Forsett is known for sharing his testimony and sharing his love of Jesus Christ. It is evident in his actions. As he was walking out of the Distribution Center, he felt drawn to two women waiting in line. He asked if he could speak with them and concluded their interaction with prayer. Holding each of their hands, he asked God to protect them, to watch over them, and comfort them through this difficult time.

Taking a few moments to hear the story of another, giving positive encouragement, and sharing a smile with one person can make the biggest difference.

Thank you, Justin Forsett, for taking the time to help those in need and for sharing the love of Christ in others around you.