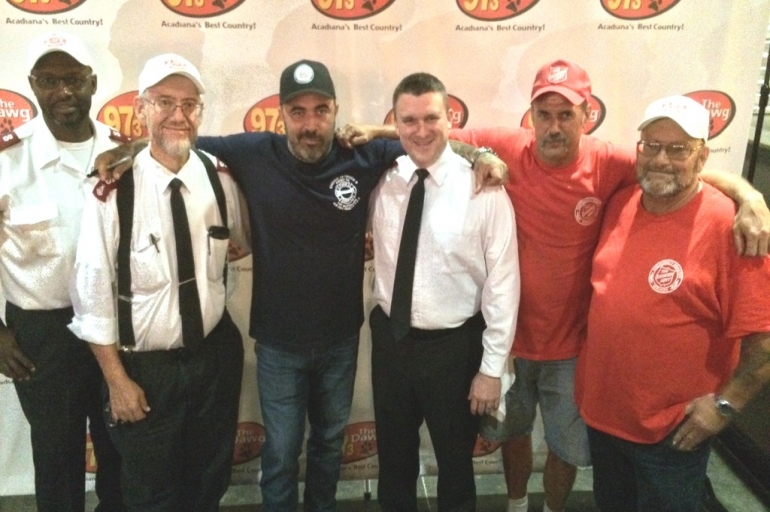 Academy of Country Music nominee Aaron Lewis performed a special VIP acoustic performance at The Grouse Room in Lafayette, Louisiana on September 6 with local radio station 97.3 The Dawg.  Lewis planned to come to town to promote his new country album, “Sinner”, which comes out September 16. He is a founding member of the rock group Staind, with whom he has released seven studio albums and sold 13 million albums worldwide, yielding four consecutive Top 3 debuts on the Billboard Top 200 as well as numerous radio hits.

Lewis didn’t want to come down to Louisiana without helping friends and neighbors in need.  In exchange for a spot on the VIP guest list, everyone was asked to bring items to The Salvation Army of Lafayette. Items donated included bottled water, cleaning supplies, toilet paper, paper towels, diapers, and personal hygiene items. All of the items will be distributed to flood victims in Acadiana.

“Louisiana is very near and dear to Aaron’s heart and he wanted to find a way to give back to the people here. We wanted to support The Salvation Army because they so much in the area,” said Jude Walker, Brand Manager and On-Air Personality with 97.3 The Dawg.

Lewis performed some fan favorites like “Country Boy”, “Grandaddy’s Gun”, and a fan-requested rendition of Prince’s “When Doves Cry”. The intimate performance finished with his new song “That Ain’t Country”.

“We are extremely grateful to Aaron Lewis and 97.3 The Dawg for supporting The Salvation Army of Lafayette. The generous donations we received tonight are much needed and will go a long way to help us as we continue to serve local flood victims,” said Major Jeff Daniel, Incident Commander for The Salvation Army Disaster Response Team.

The Salvation Army in Lafayette, Louisiana has distributed over 21,000 prepared meals and over 4,000 clean-up kits to local flood victims.