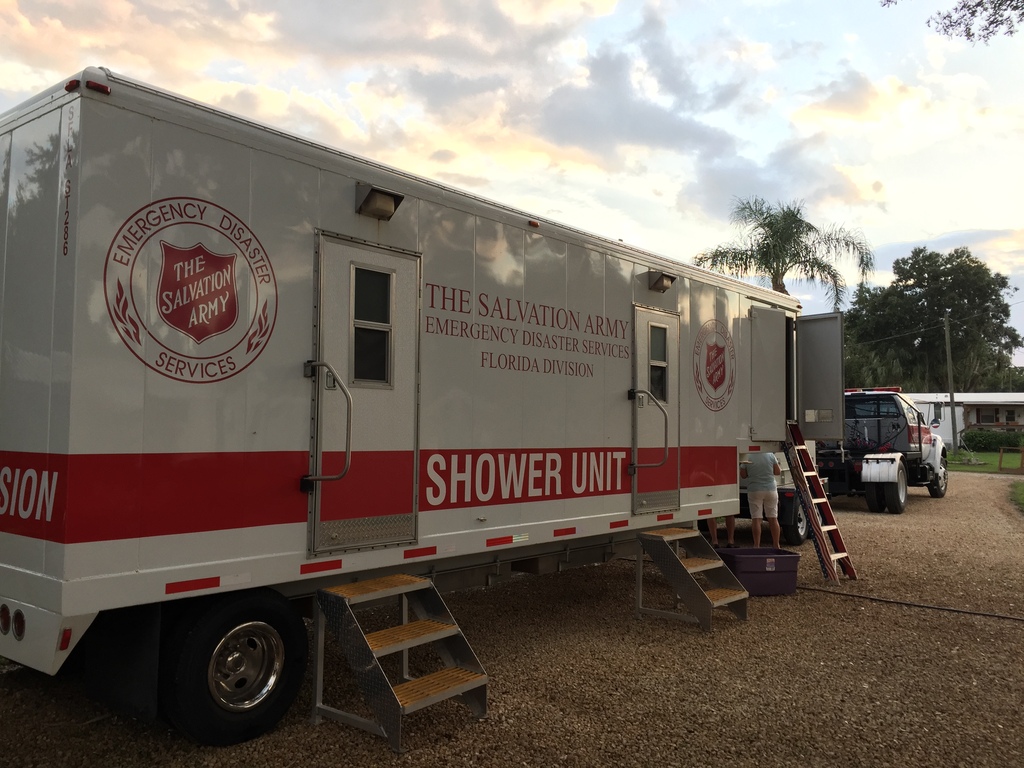 Arcadia, FL – Even while attention has been focused on the Florida Big Bend area, there are places in Florida that are still deeply affected by the aftermath of Hurricane Hermine.

In Arcadia, Fla., more than 20 inches of rain accumulated even as Hermine made its way through the northeast. In one small community, there are 50 residents without safe drinking water as well as compromised septic systems resulting from localized flooding.  On Thursday, in partnership with Catholic Charities of Florida, The Salvation Army sent a shower unit to bring a little sense of normalcy to the community.

“Residents of DeSoto County didn’t think anyone was coming to help them,” said Jerry Stickney, logistician for The Salvation Army Florida Division’s Emergency Disaster Services. “It’s been almost a week since some of the residents have had a shower, they were grateful just to have running water and towels. This is a basic need that can easily be taken for granted.”

Salvation Army disaster department in Florida Division maintains five shower units ready to respond to disasters 365 days out of the year. Partnerships with other disaster relief organizations like Catholic Charities of Florida are critical when disasters like these cover such massive geographic areas.

To date, The Salvation Army has served more than 14,500 meals, snacks and drinks since the storm made landfall on September 1. It has also provided emotional and spiritual care to more than 700 people who have been affected by the storm.

“Sometimes, giving a bottle of cold water and a snack are just an opening to helping a deeper need,” said Major Marion Durham who was part of The Salvation Army’s emotional and spiritual care team. “Often, while I hear their personal stories, I give folks to opportunity to pray over their situation and provide comfort during the crisis.”

Along with providing meals, snacks, drinks and emotional and spiritual care, The Salvation Army has distributed nearly 1,000 cleanup kits, thousands of bottles of baby food, and other critically needed supplies like flood boots and shoes

The best way to help survivors and relief workers is to make a financial contribution. Monetary donations allow disaster responders to immediately meet the specific needs of disaster survivors as the need continues to be assessed.  For more information visit: disaster.salvationarmyusa.org.

In times of disaster, The Salvation Army works with its partners at the Emergency Operations Center to coordinate relief efforts for the impacted area. The Salvation Army of Florida has 32 mobile food trucks, or kitchen on wheels, ready to respond throughout the state. Along with its canteens, The Salvation Army also has two field kitchens (large 18-wheeler trucks retrofitted for cooking and mass feeding), one command and communication unit and five shower units.