Remembering Katrina, Corps of Engineers Give Generously to Baton Rouge 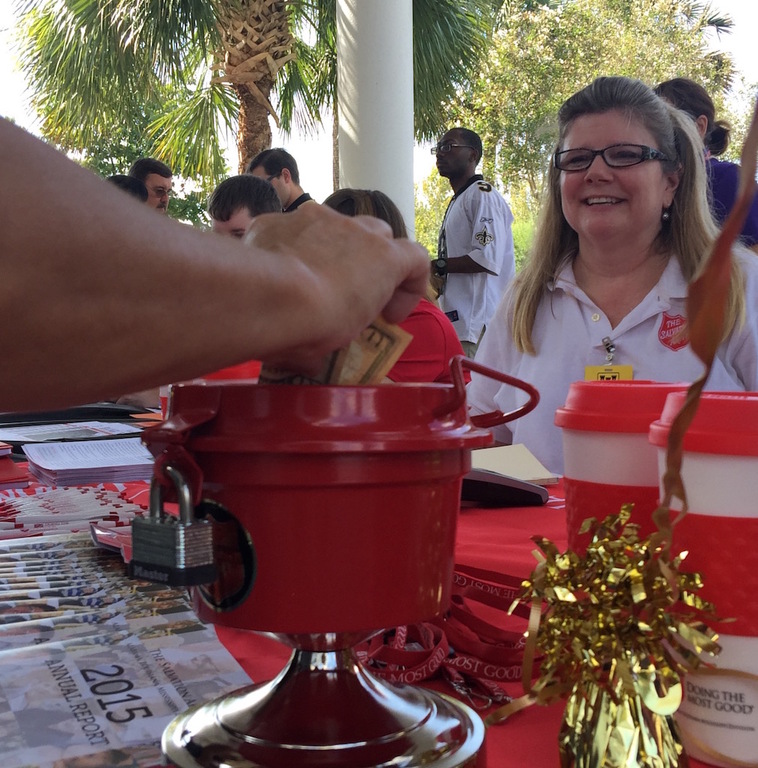 The Salvation Army’s efforts to help southern Louisiana continue its path to recovery is gradually moving from emergency response to long term recovery. In fact, mobile feeding is no longer being utilized. However, that doesn’t mean all needs are filled.

The Baton Rouge Corps will continue social services including moving directly into the application process for Christmas assistance. Add to that, the Corps and its employees are still three to six months from moving out of its temporary offices and back into the administrative building damaged by August’s historic flooding. All toll, nine of the Corps’ ten buildings were damaged with a total of 275,000 square feet of damage.

With those worries in mind, we received another reminder of who is truly in control of this relief effort.

The U.S. Army Corps of Engineers, New Orleans District hosted The Salvation Army and two other charities as they held a Flood Relief Tailgate Party for their employees with all collected donations going to support victims of the recent flooding in South Louisiana. New Orleans Commander, Colonel Mike Clancy, says his employees know more than most the devastating effects of flooding like what happened in Baton Rouge.

“Actually, eighteen of our employees lost homes due to the flooding in Baton Rouge,” said Colonel Clancy. “We wanted to do something specific, something we knew would help our home state.”

“We remember Katrina, some of our employees lost everything,” said Stuart Waits, Chief, Construction Division, U.S. Army Corps of Engineers. “We know what it’s like, and this is a day where we can do what we can to give back.”

And, they remember what happened after Katrina, and who was on the scene to help.

“Since Baton Rouge did so much for us after Katrina, there wasn’t a lot of persuasion needed to get our folks out here to help them,” said Ricky Boyett, Chief, Public Affairs, U.S. Army Corps of Engineers.

“We are humbled by the efforts of the Corps of Engineers. The generosity they have shown is why we are able to help so many affected by the flood, thank you,” said Captain Brett Meredith, Greater Baton Rouge Salvation Army.

To give to The Salvation Army’s long term efforts to help those affected by the historic flooding in Louisiana you can donate by logging on to www.salvationarmyusa.org