The Salvation Army of the Carolinas Serving Ahead of Hurricane Matthew 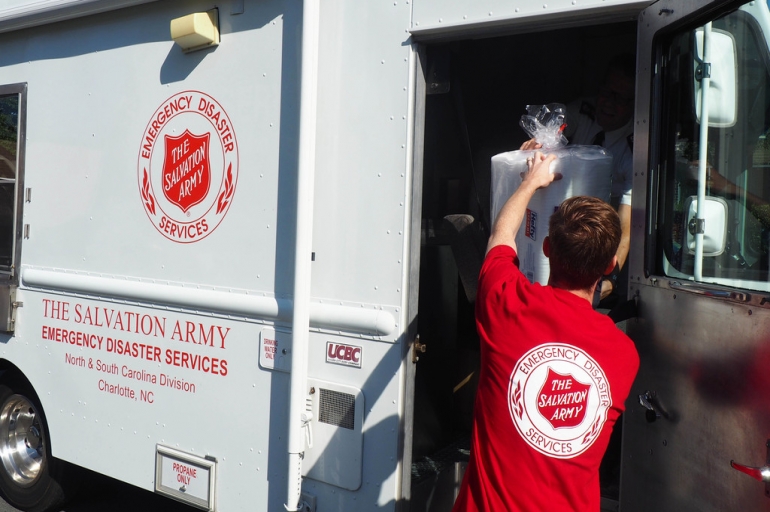 Charlotte, N.C. (October 5, 2016)—The track of Hurricane Matthew is still uncertain, but The Salvation Army of the Carolinas is preparing for service, and, in some areas of South Carolina, already responding at EOC operations and wherever local emergency management is requesting mass feeding and hydration support. Canteens from Greenville, S.C., Charlotte, N.C., and Winston-Salem, N.C.  are in the field; other canteens in the NSC division are ready to respond as soon as called.

Today, The Salvation Army of Charleston began meal service for bus drivers at the North Charleston Coliseum, which is serving as the point of embarkation for evacuees along the South Carolina coast. School busses arrived at the coliseum, ready to take people inland. In a three hour period, The Salvation Army served 623 meals and gave away two pallets of water to the bus drivers.

“The Salvation Army was blessed today to serve a meal to the bus drivers who are helping evacuate people along the South Carolina coast,” said Major Tom Richmond, corps officer for The Salvation Army of Charleston. “We are thankful for our brothers and sisters who are working on behalf of those are the most vulnerable right now.”

Other points of service in South Carolina are:

In the days ahead, The Salvation Army all over the Carolinas remains ready to respond to the immediate needs of the community as requested and in coordination with local and state emergency management. We pray for those in the Caribbean who were impacted by this storm and for those who are still in the path of the hurricane.

The Salvation Army encourages all residents of North and South Carolina to continue to monitor State sources for the latest information online at www.scemd.org and www.readync.org. For the latest emergency disaster services news from The Salvation Army, follow the social feed on Twitter at @salarmyeds or visit disaster.salvationarmyusa.org.