More than 12,000 Meals Already Served in Wake of Hurricane Matthew 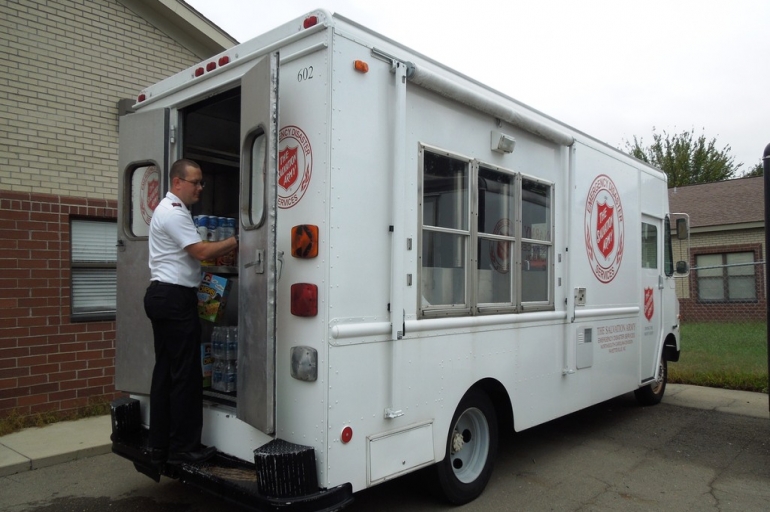 Atlanta, GA - Even as Hurricane Matthew continues to pound North and South Carolina, Salvation Army disaster units in Florida, Georgia, and the Carolinas have already begun to respond to the storm's effects, providing 13,532 Meals, 8,619 Drinks, and 6,070 Snacks (for current statistics go to http://disaster.salvationarmyusa.org/aboutus/?fastfacts).  Seventy-four (74) Salvation Army mobile feeding units are now active across across four states.

Two Incident Management Teams (IMT) will deploy on Saturday and Sunday.  One team will deploy to Savannah and another to Brunswick, GA. The Brunswick IMT is being deployed from The Salvation Army's Arkansas & Oklahoma Division and will be responsible for coordinating operations in both Brunswick and St. Marys, GA.

The Georgia Division has activated 18 mobile feeding units across the state.

These units include 11 mobile kitchens deploying  to the GA coast.  Four canteens (from Atlanta Red Shield, Carrollton, Covington and Macon) will deploy to Savannah; four canteens (from Elberton, Gainesville, Lawrenceville and Columbus) to Brunswick; and three canteens (from Americus, Bainbridge and Valdosta) to St. Marys. A 53' foot field kitchen from Texas and an additional disaster canteen from Biloxi, MS, is also in route to support feeding efforts.

The Salvation Army of Dothan, AL, is providing support at an emergency evacuation shelter in Dothan, AL, and is coordinating the delivery of meals.
The Salvation Army has deployed two satellite communications units in support of disaster operations; one unit is in Florida and the second is stationed in North Carolina.

The best way to help after a disaster is to make a financial donation to the charity of your choice.  Cash is flexible, can be used immediately in response to a crisis, and allows disaster relief organizations to purchase exactly what is needed, when it’s needed. Cash gives relief organizations the means to procure supplies near the affected area, which cuts down on transportation time and cost. Monetary contributions also support local economies and ensure that businesses can operate when relief supplies diminish.

To support The Salvation Army's Hurricane Matthew relief efforts in Haiti, Bahamas, and the other Caribbean islands, please consider making a financial gift at salar.my/Matthew