The Salvation Army of Georgia Responds to Hurricane Matthew 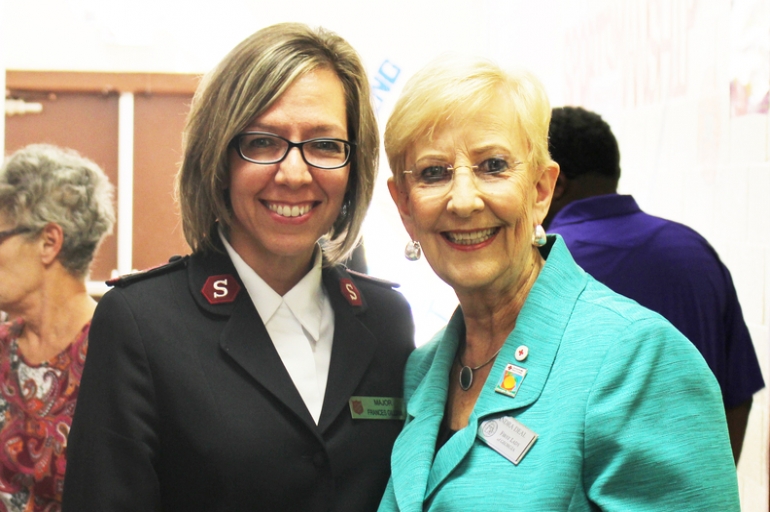 An avid supporter of The Salvation Army, Georgia’s First Lady, Mrs. Sandra Deal, visited evacuation shelters served by The Salvation Army of Georgia in Augusta and again in Macon. Georgia Divisional Commander, Major Charles Powell, welcomed Mrs. Deal as she served and encouraged those affected by Hurricane Matthew in Macon.

Two Salvation Army incident management teams have been established in Savannah and Brunswick to coordinate efforts in the affected coastal Georgia area and throughout the state. Canteens from Savannah, Atlanta, Carrolton, Macon, and the Alabama-Louisiana-Mississippi Divisions are currently serving first responders in Savannah, with Georgia canteens from Gainesville and Covington scheduled to arrive in the area tomorrow. Canteens from Bainbridge, Columbus, Elberton, Lawrenceville, and St. Marys are serving in Brunswick and St. Marys.

“First responders are the main focus for The Salvation Army’s initial services in Georgia’s coastal area until local and state officials clear roads, restore power, and open roads to returning residents,” said Captain Chris Powell, Incident Commander for the Savannah Incident Management Team. As people are able to return to their homes, The Salvation Army will adapt its mobile canteens to serve the changing areas of need.

The best way to help survivors and relief workers is to make a financial contribution. Monetary donations allow disaster responders to immediately meet the specific needs of disaster survivors as the situation continues to be assessed.

Currently, The Salvation Army is not accepting in-kind donations from the general public for disaster relief operations. This may (or may not) change in the future.

State and local officials plan to open areas previously closed for road clearing and power restoration later today. Hoping to soon return safely to their homes, 475 evacuated residents at an Augusta shelter are scheduled to be housed at the Savannah Civic Center shelter where a Salvation Army mobile canteen is deployed.

As the situation develops, The Salvation Army stands ready to respond aggressively and serve compassionately wherever and whenever needed.