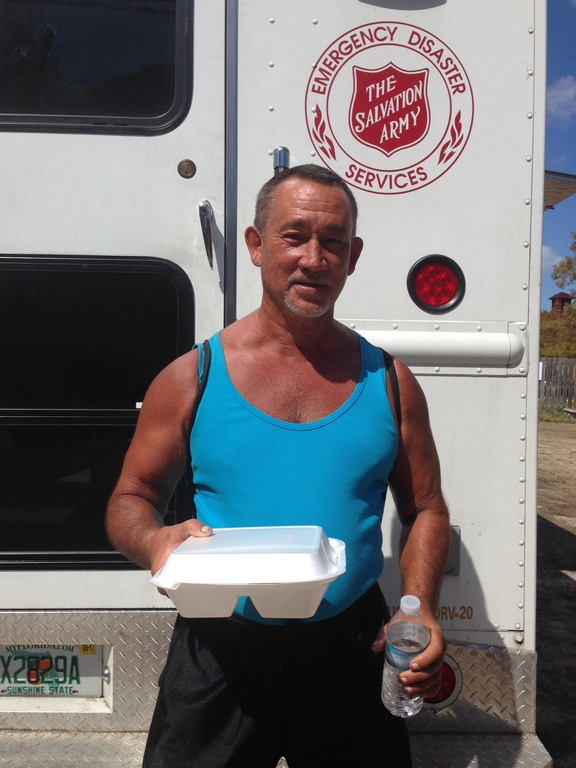 (Beverly Beach, Fla.) October 10, 2016 – August Maxwell wearily picked up the debris from her Beverly Beach neighborhood on Monday when she spotted a Salvation Army mobile kitchen serving lunch.
Maxwell’s power has been out since October 6. She evacuated to Palm Coast only to come home to the roof of her 1963 trailer blown away from hurricane Matthew.
She said she was grateful for The Salvation Army’s compassion, roving through neighborhoods and distributing meals, coffee and cold water.
To date, The Salvation Army of Florida has served more than 54,000 meals, snacks and water to residents and first responders impacted by hurricane Matthew.
Within a few hours after the Category 4 storm swiped Florida last week, The Salvation Army had its canteens, or kitchen on wheels, deployed to the east coast.
At the height of the Florida response, it had 32 mobile kitchens serving communities from Nassau to St. Lucie counties.
On Monday, The Salvation Army is expected to reassign some of its mobile kitchens from Florida communities, transitioning its services and deploying some of its fleet to more affected areas such as Georgia and North and South Carolina.
The Salvation Army still plans to serve meals and distribute water to small communities still without power.
James Dunn’s St. Augustine neighborhood is still without power.
Dunn said he was grateful for The Salvation Army’s for the warm lunch he received on Monday.
Dunn, a former resident of The Salvation Army Adult Rehabilitation Center in Orlando, walked up to the mobile kitchen to grab a quick bite to eat before returning to clean his home, which received water damage.
“When the storm surge came through there was four feet of water,” Dunn said. “I’ve been through everything in this town and now I can say I’ve been through a hurricane.”
Throughout his life, Dunn said, he’s received a lot of help from The Salvation Army. Today, he was happy to see the canteen.
“I love The Salvation Army,” he said. “They are providing so much more than food in this community.”The best way to help after a disaster is to make a financial donation to The Salvation Army.  Cash is flexible, can be used immediately in response to a crisis, and allows disaster relief organizations such as The Salvation Army to purchase exactly what is needed, when it’s needed. Cash gives relief organizations the means to procure supplies near the affected area, which cuts down on transportation time and cost. Monetary contributions also support local economies and ensure that businesses can operate when relief supplies diminish.