Hurricane Matthew Response in the Carolinas: God Goes Well Before Us 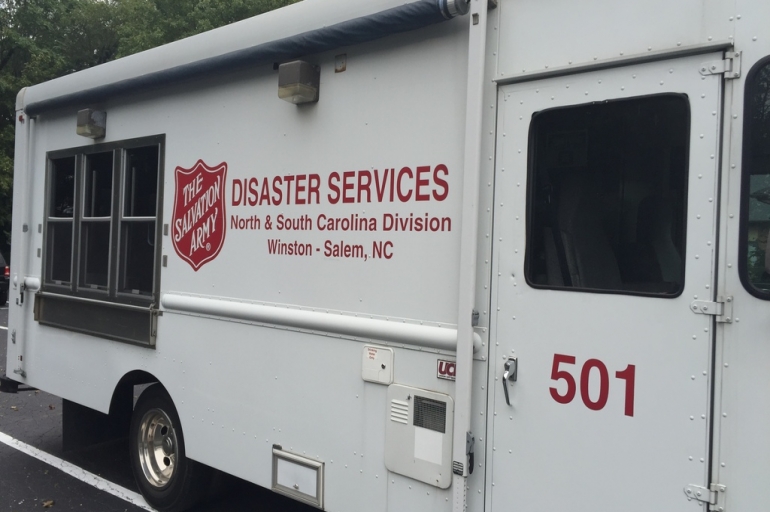 The police officer had not eaten since he had started his 14 hour shift earlier that day. His concern for the safety of the public during Hurricane Matthew was a bigger priority to him than his own needs. But now he was hungry and tired and looking for food. All restaurants in the town were closed and his day wasn’t finished yet. He stopped at a gas station for gas.

“We were driving around looking for a group that needed food. We had cooked 120 hamburgers at supper and they didn’t all get eaten,” said Lt. Bush, corps officer from The Salvation Army of Winston-Salem. “We packed them up to serve somewhere else - we knew we could feed someone, we just didn’t know who.”

The canteen pulled into a gas station to fuel up.

When the Salvation Army canteen (mobile feeding kitchen) from Winston-Salem rolled into the gas station, the police officer walked over and asked Salvation Army officer Karl Bush if they were somewhere to feed people. Bush asked the officer if he knew of someone who needed a meal. “Yes, me,” was the response.

Lt. Bush told the officer that there was plenty and to call any of his fellow officers so they could eat. The officer put a call out on the radio to the other units in the area and in no time, police officers were at the gas station, eating burgers at the pop-up restaurant on wheels.

“We ran out of buns and served the burgers on bread, didn’t have any cheese, but the officers were so grateful for the food.  Man! We were just grateful for their service and dedication to the public. Feeding them was the least we could do - it was humbling,” added Bush.

By the time the feeding was over, 30 police officers had eaten. There were just enough hamburgers to feed the crew.

“Exactly what they needed is exactly what we had. God goes well before us,” Bush said.

As the disaster response continues, The Salvation Army will be in shelters, on the streets, in neighborhoods—any place that we are needed.

How the Community Can Help
The best way to help after a disaster is to make a financial donation to the charity of your choice. Monetary contributions also support local economies and ensure that businesses can operate when relief supplies diminish.