Joy in the Midst of the Storm: The Salvation Army in Savannah 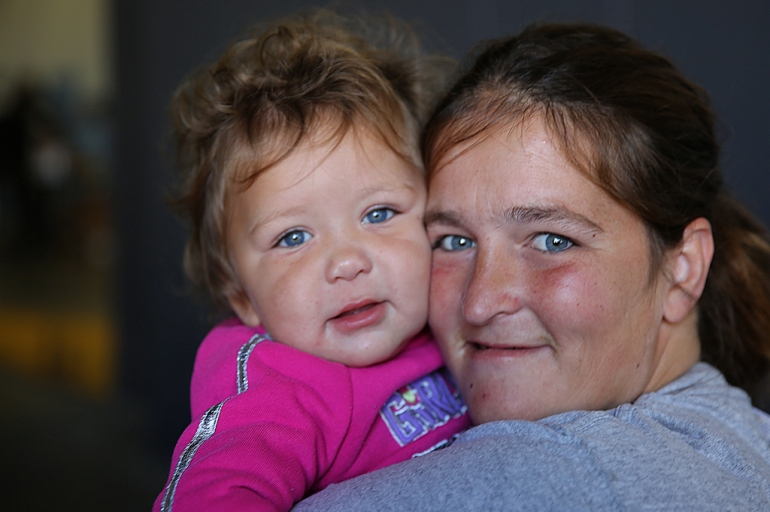 Almost a year old and full of giggles, little Avreyanna is happy as can be in her mother’s loving presence, and especially so when she finds a cracker in her hand.  “She’s just such a happy baby,” Jamie Boykin gushes about her little girl.

If you are anywhere close by, it doesn’t take long to be captured by Avreyanna’s infectious joy for life. “No matter where we are or what happens to us, we know God will take care of us,” says Jamie. As she talks about her circumstances, it’s easy to see why Avreyanna was born with such a bright outlook on life.

“We were staying at The Salvation Army shelter in Savannah until we were evacuated to Augusta,” Jamie says calmly as Avreyanna struggles to get a closer snuggle in her arms.

One hundred Salvation Army shelter residents, including Jamie and Avreyanna, along with approximately 2,600 other Savannah residents, were evacuated by bus ahead of Hurricane Matthew to an Augusta shelter served by The Salvation Army. A few days later, many of the evacuees in Augusta were brought back to the main shelter in Savannah located at the Savannah International Trade & Convention Center. The Savannah Salvation Army shelter was damaged slightly during the hurricane, so residents will be staying at the Convention Center until power is restored and repairs can be made.

“We’re so glad to see The Salvation Army canteen pull up here to the Convention Center – we knew you would take care of us,” says Jamie as she puts Avreyanna in her stroller. “The Salvation Army has been so good to us – helping us with whatever we need.”

Prior to the hurricane, The Salvation Amy in Savannah was able to provide Jamie with a safe and secure place to live, food, and necessary resources. This allowed her to get Avreyanna’s stroller and child care so she could go to work and get back on her feet.

“The residents and people at The Salvation Army shelter have become like our family,” said Jamie with a twinkle in her eye, adding “There is a lot of joy here, even in the middle of everything going on.”

Repairs are scheduled for The Savannah Salvation Army building, and shelter residents should be able to move back in a few days – just in time for a planned party to celebrate Avreyanna’s first birthday.