Brunswick: A Bottle of Water and an Encouraging Word 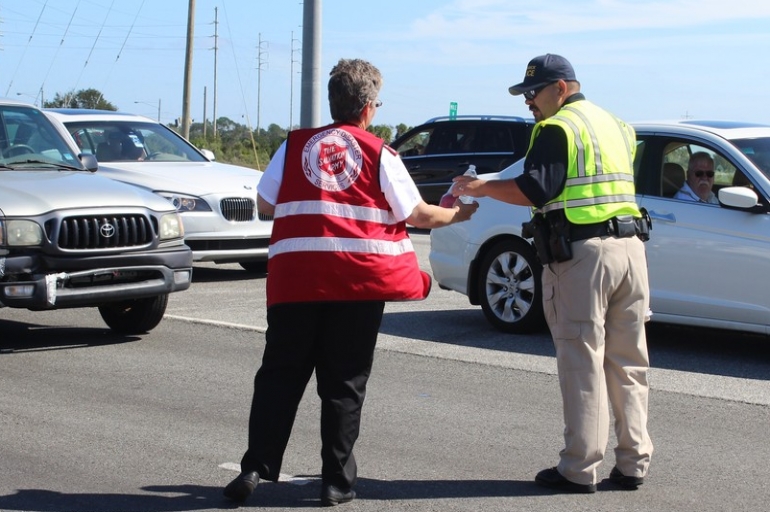 Brunswick, Georgia –  The islands near Brunswick were affected with winds and some storm surge causing downed trees and loss of power.  Due to the fallen trees, many families and individuals who evacuated had to wait until Monday or Tuesday to be allowed back on the islands.  On Tuesday, residents were allowed to get back on St. Simons Island; however, the wait was long.

John, a police officer in a position of authority, and many other police officers had been out several hours in the sun.  The police were directing traffic and answering questions to the best of their ability.  Many of the residents were lined up for hours waiting to cross the bridge to the island.  The traffic was snarled and often tempers were high.  The cars in line were detoured in order to maintain an orderly system.  Due to this, the police were not recipients of kind words and remarks even though they continued trying to be kind to those with tempers while keeping the traffic flowing.

Sometimes a bottle of water is all we can do.  Sometimes thanking the first responders, such as fire and police, and letting them know you know it is hard work is helpful.  John had personal tragedy last year and is just now starting to get better.  When personal tragedy meets public tragedy, even police officers need to decompress.

Major Sue Dewan spoke with John and passed out water to many of the police men and women who were in the heat, directing traffic and doing their best to keep all calm.  Major Dewan states “It is a privilege to be a source of comfort to people, a caring presence, and perhaps to even pray with those who have lost so much.”

As The Salvation Army provides food and hydration, providing emotional and spiritual care, or as we sometimes say ‘food for the soul’ is as important as anything we do.   The Salvation Army serves in His name to all those in need and who need a listening ear or just a great big hug.