The Salvation Army in Orangeburg: It's not THAT we serve, it's HOW we serve 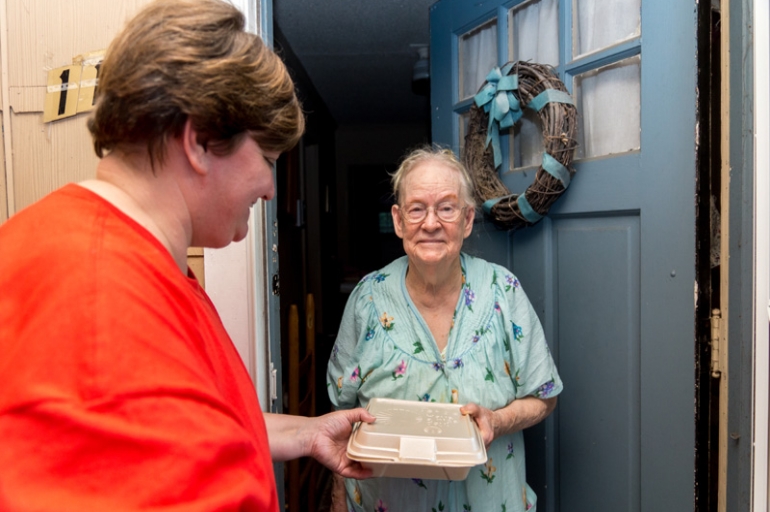 Orangeburg, SC - Numbers are impressive. It always feels good to be able to sit back and say things like, “The Salvation Army has already served more than 120,000 meals, 150,000 snacks and 125,000 drinks in response to Hurricane Matthew in Florida, Georgia and the Carolinas.” (Which is true, by the way.) It feels even better to be able to say that we aren’t even close to being done, and that we will continue to serve as long as there is need and we have the means to do so.

But that’s “big picture.” What’s the little picture look like? Well, if you zero in on the local interactions that make up the more than 120,000 meals, you’ll see that it’s not THAT we serve, but HOW we serve that makes the difference.

Take Captains Robert and Wanda Long, for example. Hurricane Matthew is their fifth disaster since they were assigned to Orangeburg, South Carolina, five years ago, and Captain Wanda Long is proud to tell anyone that’ll listen, “This community is just a big family.”

The Longs, along with their crew of volunteers and corps members, begin their day at 5 a.m., feeding three meals a day to those staying at a special medical needs shelter and the first responders at the Orangeburg Emergency Operations Center. But after those locations are provided for, Captain Wanda Long and her fellow 5-a.m.-er, Glenda Cramer, deliver individual meals to those who are unable to get to a shelter. And when they do, it’s with a smile, a hug and some kind words to help them get by.

Ms. Louise is one of those people. Louise was still without power when the Longs learned of her need, and they immediately offered to bring her hot meals with their regular rounds. But it didn’t stop there. Captain Wanda Long also started bringing her morning coffee, candles, flashlights and more.

But even then, it doesn’t stop. At the end of the night, Captain Wanda Long and Glenda were stopping at Piggly Wiggly to pick up a food donation when a mother and two of her daughters approached them, saying they were without power and asking if they could have some food.

Captain Long immediately responded, “Do you know where our corps building is? Follow us there and we’ll be able to feed your family. We have enough there for you.”

Please consider donating to help us provide for the vast need many are experiencing  in the wake of Hurricane Matthew. Go to salar.my/HurricaneMatthew or call 1-800-SAL-ARMY.