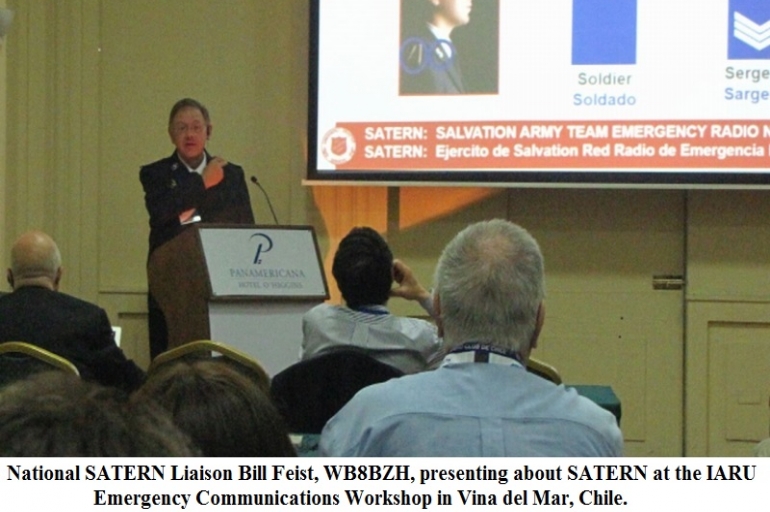 Feist presented a program on the Salvation Army Team Emergency Radio Network (SATERN) at the Emergency Communications Workshop (ECW) on Tuesday, 11 October.  Feist spoke about The Salvation Army in general and about SATERN including its’ history, its primary missions, and the work it is doing with a particular emphasis on its’ international outreach such as the recent responses to Hurricanes Matthew and Nicole.  The presentation was well received with representatives from other countries later telling Feist that they had not known much about The Salvation Army or its’ work prior to this.

Two recurring themes were emphasized throughout the Emergency Communications Workshop.

The first was that the world’s communications infrastructure is becoming increasingly robust and resilient.  Pablo Palacios of the International Telecommunications Union (ITU) said, “The world is becoming increasingly better connected” with nearly 7 billion people now interconnected.  As an example, he cited the fact that Chile’s communications infrastructure was much less overwhelmed after the 2016  earthquake than it had been after the 2013 earthquake.

Because of this, several speakers made it clear that amateur radio operators, especially in the field of emergency communications, need to continually adapt by meeting the challenge of every-changing, new communications technology and methods.  American Radio Relay League (ARRL) Emergency Preparedness Manager Mike Corey, KI1U, pointed out that served agencies are beginning to look for a variety of emergency communications based on new technology including high speed data and video, high resolution imagery, the use of drones, file sharing through methods such as WinLink, Hi-Speed Multi-Media (HSMM) and mesh networks.

The subject of HSMM was specifically addressed by Andre Hansen, K6AH, who spoke about the Amateur Radio Emergency Data Network (AREDN).  AREDN is a mesh network being developed in San Diego, CA.  Hansen reviewed the progression of message communications beginning with  messages being written on paper to be transmitted by voice or Morse code, to messages being sent digitally by packet radio and now methods such as WinLink, to Hi-Speed digital mesh networks.  Although Hansen fully supports the use of WinLink as a current best practice, he pointed out that mesh networks such as AREDN “eliminates the congestion caused by large messages.”

Alfonso Tamaz, XE2O, President of the Federacion Mexicana Radioexperimentadores (FMRE), discussed the WinLink and WinMor.  network being developed throughout Mexico.  He emphasized the fact that the system was “transparent” to non-amateur radio operators who received emails via WinLink.  The fact that, to the recipient, it was just another email helped non-technical people outside of  the amateur radio community accept systems like WinLink.

Another example of the use of new technology in amateur radio is the nationwide digital repeater infrastructure being developed by the Club de Radioexperimentadores de Nicaragua in partnership with the Nicaraguan Health Ministry since 1991.  The goal is to interconnect about 70% of Nicaragua’s hospital and medical system.  There are currently 26 digital repeaters and 100 of a planned 600 hospitals and medical clinics that have the system now installed throughout this South American nation.  The Nicaraguan Health Ministry is financing the project.

However, Radio Club de Chile President Galdino Besomi, CE3PG, cautioned that the move towards increasingly technologically advanced communications must not be done at the expense of abandoning other methods such as basic HF communications because “amateur radio communications are intended to be redundant.”  He further made it clear that, “the most important element in amateur radio is the amateur radio operator” and that, “it is important that amateur radio advances in technology while not forgetting the human element and their welfare and abilities.  The ultimate goal is the development of human capital.”

Representatives of several nations noted that young people, whom many amateur radio organizations would like to recruit into amateur radio, are much more interested in communicating through the use of new technology.  Corey stated, “Young people don’t go to meetings; they go to virtual meetings.”  As a result, one of the recommendations from the ECW was to encourage amateur radio clubs and organizations to more frequently use virtual meeting platforms and social media as a way to reach out to the public and especially to youth.

This discussion led directly to the second recurring theme at the ECW – the need to increase the engagement of young people interested in new technology and new means of communications into amateur radio.

The participants at the 2016 Emergency Communications Workshop agreed on the following:

1.   There continues to be a need for greater public education on the value of amateur radio.  Specific ideas discussed included availability of printed material and social media presence for IARU Region 2 emergency activities.

2.   Events such as the Nepal and Ecuador earthquakes and the Philippines typhoon demonstrated a need for cached Amateur Radio equipment that can be deployed to support emergency communications activities. It was recommended that the IARU consider approaching ITU with a plan to add such resources to the already existing ITU caches of telecommunications equipment that are pre-staged all around the world.

3.   The availability of platforms such as Google Hangout, Skype, and similar virtual meeting programs make it possible to connect those in IARU Region 2 involved with Amateur Radio emergency communications. This could allow for coordination, training, and preparedness networking. Additionally it may provide a means for youth participation in virtual emergency communications workshops.

4.   Exercises such as Cascadia Rising and Pacific Endeavor and events such as the Nepal earthquake, Ecuador earthquake and hurricane Matthew demonstrate the unique ability of radio amateurs to work together across political boundaries.  Cross-border and multinational exercises provide a way to practice their response capability to be prepared for large scale disasters. It was recommended that the IARU Region 2 Emergency Coordinators work together to develop a protocol to design, implement, evaluate and report on such exercises.

5.   Traditional means of Amateur Radio communication, such as voice and CW, are vital to our ability to provide emergency communications in IARU Region 2. Amateur radio must encourage the development of operator skills through on air activity and continued training.  Additionally, due to new and emerging communications needs, amateur radio must encourage the wide use of new technologies such as radio email like Winlink, mesh networking protocols like that presented by AREDN, weak signal modes, and improved health and welfare messaging –so as to meet the needs of served agencies.

6.   IARU Region 2 Emergency Coordinators must continue to work on the IARU Emergency Telecommunications Guide ensuring that it is relevant and useful to radio amateurs through regular updates and improvements.

Corey and Ramon Santoyo V, XE1KK, initiated the idea of developing ECWs during the Region 2 General Assemblies.  During the 2013 ECW, recommendations were made to work on and improve the IARU Emergency Telecommunications Guide which is now available on the IARU website.  It can be found at:  http://www.iaru.org/emergency-telecommunications-guide.html

The second ECW was chaired by Corey as the Emergency Coordinator for Area B of Region 2 which encompasses the United States and it’s territories in Region 2.  This year’s event was co-chaired by Dr. Santos.  The workshop was attended by representatives from Chile, Argentina, Ecuador, Peru, Brazil, Venezuela, Honduras, India, Trinidad and Tobago, Canada, Mexico and the United States.  The presentations and other material from the ECW will be available on the IARU Region 2 website after the General Assembly concludes.  A third ECW for the 2019 XX General Assembly will be proposed at a later date.

There were also opportunities to operate from Chile.  The Radio Club de Chile, CE3AA, set up a special event station for the General Assembly with the call signs XR2IARU and XR3IARU.   Participants at the conference who had obtained a Chilean reciprocal license (e.g. CE2/WB8BZH) were able to operate the station at different times throughout the General Assembly.  Feist made several Morse code (CW) contacts from the station.