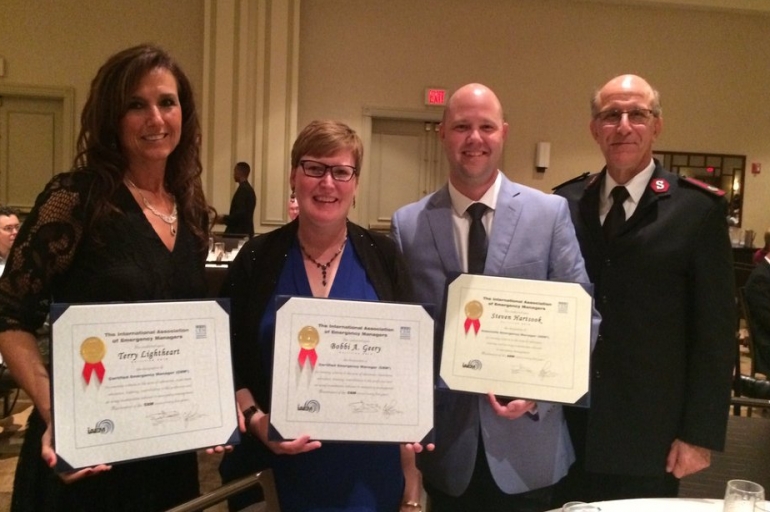 Major Terry Israel, Community Relations & Development Secretary for The Salvation Army’s Southern Territory, attended the conference and was on hand to congratulate the newly minted professionals.  “I couldn’t be prouder of Bobbi, Steven and Terry,” he said. “Gone are the days of disaster service as a hobby.  It’s a profession and we need people with professional credentials that understand the industry and that continue to train and contribute to the field as the leaders of our program.”

The CEM® designation is the highest honor of professional achievement available from the International Association of Emergency Managers (IAEM), which has in its membership more than 5,000 emergency managers representing local, state, and federal government; private industry; and military emergency managers.  To earn certification, applicants must complete an extensive credentials package, a management essay, and a written examination. The credential requirements include experience, references, education, training, and contributions to the profession. To maintain certification, recipients must submit additional training and contributions to the profession every five years.

Also at the conference, former Salvation Army employee Ms. Lanita Lloyd assumed the President’s chair of IAEM for 2017.  “It’s quite a privilege to have someone with a such a strong Salvation Army connection assume leadership of such a prestigious organization,” said Southern Territorial Disaster Coordinator Jeff Jellets.  Jellets was appointed to a three-year term as a commissioner on the CEM certification board and will help review future applications for the CEM/AEM designation.  Ms. Terry Lightheart was appointed as the chair of the IAEM Community Service & Faith-Based Caucus.