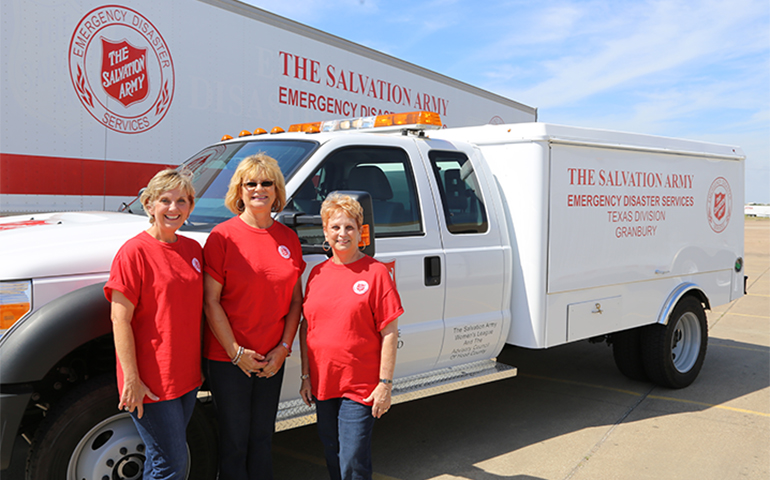 Dallas, Texas (November 1, 2016) - Laurie, Donna, and Linda are part of The Salvation Army of Granbury, Texas. The ladies attend regular Service Unit board meetings and are members of the Women’s Service League (WSL), working hard year-round to provide assistance to those less fortunate in Hood County. Both the Service Unit and the WSL are quick to participate in community projects. However, the three friends never anticipated they would be serving on the front lines of Salvation Army disaster response in Baton Rouge!

Following damaging tornadoes in Hood County in 2013 Linda and Donna were among those who volunteered in serving the community.  After seeing the devastation tornadoes brought to their neighbors, they later expressed the desire to be more involved in disaster response efforts. Thus far a group of 12 individuals from Granbury have completed the necessary Salvation Army disaster training, qualifying them as registered disaster volunteers. The Salvation Army of Granbury felt so strongly called to serve others during disasters that in August they agreed to purchase their very own Rapid Response Unit (RRU). This vehicle is based on a catering truck design built around a Super Duty Ford F450 redesigned to fully maximize the ability to serve in times of disaster. The truck can pull disaster trailers, carry and deliver hot food and drinks, and has a large storage area for essential supplies.

The three ladies were minding their business when the call to deploy arrived on a Tuesday. By Sunday they were picking up their brand new RRU and on the road to Baton Rouge, LA, following historic and catastrophic flooding. “Our husbands took us to the gate and waved us goodbye!” said Donna. “We didn't know quite what to expect when we got there but I was astounded at how organized it was,” said Donna. “Everyone had a job to do.”

Donna, Laurie and Linda were teamed up with experienced disaster responders working both at the distribution center and out in the worst affected communities. “We followed the procedures we had learned in the training,” said Linda – affectionately referred to as “Chief” by Laurie! “We were blessed to serve so many people and had many opportunities to pray with people, hug them, and listen to what they were going through. For me this is a very meaningful part of The Salvation Army’s work in disaster.”

“Residents were so grateful for the meals and help, even though many had lost everything. One guy even brought us cookies just to say thank you!” said Donna. “We’d drive into the neighborhoods, honk the horn and be ready to get to work. People would be there waiting for us. I wasn't surprised because that food was good!” In addition to delivering hot food and snacks to people whose homes were flooded, the teams also provided refreshment and meals to first responders and partner agencies.

The ladies agreed that their experience volunteering with The Salvation Army in Baton Rouge was life changing. Since returning home the Granbury disaster team has already been called out to respond to one local emergency situation and “Chief” and her two sidekicks will be ready and prepared for future disaster responses.