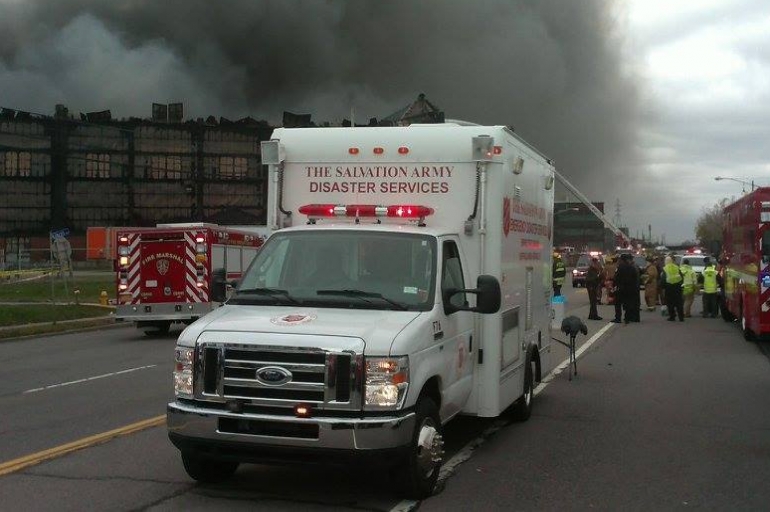 Lackawanna, NY - The Salvation Army Emergency Disaster Services team based in Buffalo, NY (Erie County) was requested and responded to a four alarm industrial fire in the City of Lackawanna, New York on Wednesday morning. The team provided canteen and hydration services to firefighters who were involved in fighting the large fire at the former historic Bethlehem Steel Plant on Lee Street.  Due to the type of materials burning and high winds in the area, an evacuation order was issued Thursday for 300 homes to the North and East of the fire scene.  The Salvation Army along with members of the American Red Cross Greater Buffalo Chapter Disaster team worked together to open a shelter at Lackawanna High School and provided sheltering, emotional care and feeding to those displaced overnight.

“The request to respond came directly from the City of Lackawanna to the local Salvation Army Officers in the community. Our team of volunteers from across the Greater Buffalo area provided meals, snacks and water at the fire scene as well as shelter and food to those displaced last evening.

We are grateful to the Buffalo Area Services Command for supervising and staffing this important operation and to the American Red Cross of Greater Buffalo for their steadfast partnership with us in serving our community.” said Michael R. Schwartz, Divisional Disaster Director for the Empire State Division of The Salvation Army.