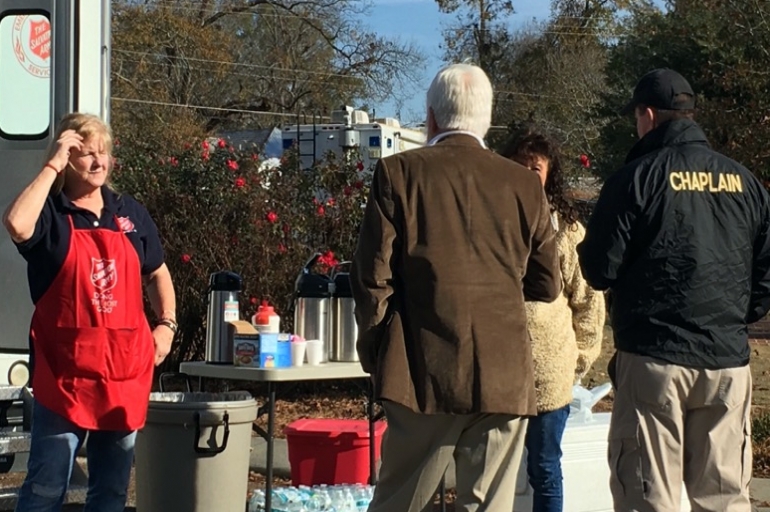 The Salvation Army Americus mobile canteen was deployed at the request of Americus Fire Department Battalion Chief, Tommy Whitaker, who also serves as The Salvation Army Advisory Board Chairman for Americus. The mobile canteen was stationed at the Police Command Center shortly after it was set up on Wednesday afternoon to provide hydration, snacks and hot coffee to responders. The Salvation Army staff and volunteers continued to serve responders through the late hours of Wednesday, and again starting in the early hours of Thursday until 3:00 p.m.

A total of over 200 cups of hot coffee, 350 snacks and 100 bottles of water were served to a very thankful parade of local and state law enforcement and fire officials.

“The people we served were so thankful we were there for them,” said Misty Belcher, The Salvation Army Service Center Director for Americus. “One Georgia Bureau of Investigation agent stopped by to say ‘Thank you,’ gave me a GBI pin and told me I was an honorary part of the GBI team for the day.”

“The Salvation Army has been on the scene of the shooting providing hot coffee, snacks and hydration throughout the incident,” said Major Jack Butler, The Salvation Army of Georgia Emergency Disaster Director. “I want to thank our Salvation Army staff and volunteers for what they are doing as they serve ‘in His name’ to those in crisis.”

Our thoughts and prayers are with the families of the fallen officers, and with the city of Americus.