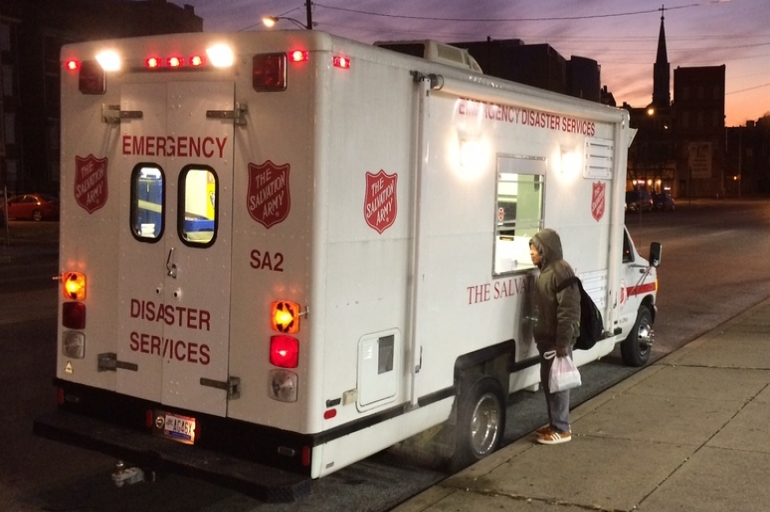 Cincinnati, Ohio, 12/19/16 - The Salvation Army’s Emergency Disaster Services partnered with the Social Ministries Dept. in greater Cincinnati for an evening food and emergency supplies distribution following a cold snap that hit the region this past week.

Representatives from The Salvation Army’s SWO Divisional Offices braved the cold weather Monday night to serve those living on the streets in Cincinnati.  Larry Harvey, a Salvation Army employee working in emergency assistance stated, “Cold weather like this is definitely an emergency.” The roving EDS canteen searched the city, meeting people where they were, supplying them with food, warm drinks, and cold weather gear. The cold weather packs handed out were made up of gloves, socks, knit caps, heating pads, and a blanket. SWO Social Ministries Director, Sarah Wagner said, “Serving the homeless during the year is hard work, but it is infinitely harder during the Christmas season.”  While the numbers are hard to pin down, the Cincinnati Homelessness Coalition estimates that there are around 12,000 people in the Cincinnati area experiencing homelessness right now. Wagner went on to say, “We do as much as we can; the need is great, but The Salvation Army is always working on ways to support the men, women, and children of the area.