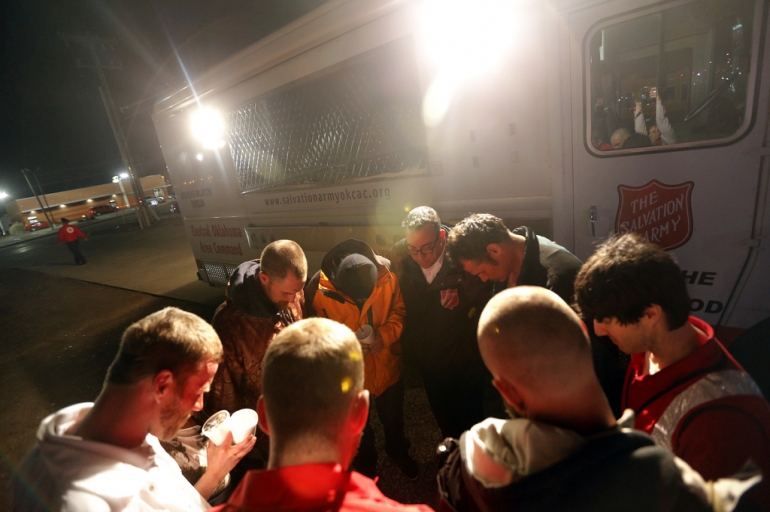 How one Area Command is bringing EDS, Social Services and Corps Ministry to the Homeless

The heartbreaking stories of individuals dying as a result of sleeping outside in extreme temperatures aren’t uncommon. Major Carlyle Gargis, area commander of The Salvation Army Central Oklahoma, has known many homeless individuals who have died and promised he would do something about it when he had the opportunity.

“I made a vow to myself that once I had the resources and team in place, we would start a program that builds relationships with the homeless so they know where they can come in a time of need,” said Gargis.

In the fall of 2014, Major Gargis’ dream was realized with Night Watch. Night Watch is a team of staff, corps members and community volunteers who minister weekly to those in Oklahoma City who are often overlooked and ignored. “We are striving to live the Territorial mission statement which challenges us to live radically for Jesus Christ, love inclusively and serve helpfully while inviting everyone around to join us,” Gargis shared.

The team first meets for prayer then prepares sandwiches, soups and other various snacks and beverages to give away. Depending on the weather conditions, the team also brings along coats, blankets, gloves and winter caps. Heading out into the night, the team stops by known camp sites but also allows the Lord to lead them as they minister with food, warm clothing items and prayer. The mix of EDS, social services, volunteers and corps ministry brings about incredible stories of hope.

When The Salvation Army Night Watch team first met Mark, they offered him food, water and prayer along with an invitation to stay in the shelter but he refused. Over the next few weeks, the team encountered Mark again and again offering food, prayer and the same invitation for shelter but again and again he would refuse.

He finally accepted the invitation and as he settled in, Mark began attending worship services and soon after he gave his life to God. He developed goals and began to transform his life – transitioning from homelessness to self-sufficiency by finding employment and housing.

Mark is now a key member of the Night Watch team as he shares his testimony with others of how The Salvation Army helped him – hopefully giving them the wakeup call that he needed for so long. “I still have a long way to go of course, and God has a lot more work to do in me but I’m looking forward to what He has planned. Without The Salvation Army Night Watch team, I would be dead or in prison.”

This week as winter weather swept through the Midwest, the Night Watch team was ready to deploy Thursday evening. The invitation to stay in The Salvation Army’s shelter was extended to more than 20 people and one individual accepted. Although many decide to brave the weather on their own, relationships are being developed and individuals who find themselves on the street know there is a safe place at the Oklahoma City Salvation Army when they are in need.