Serving South Georgia: Doing the Most Good Where It is Needed Most 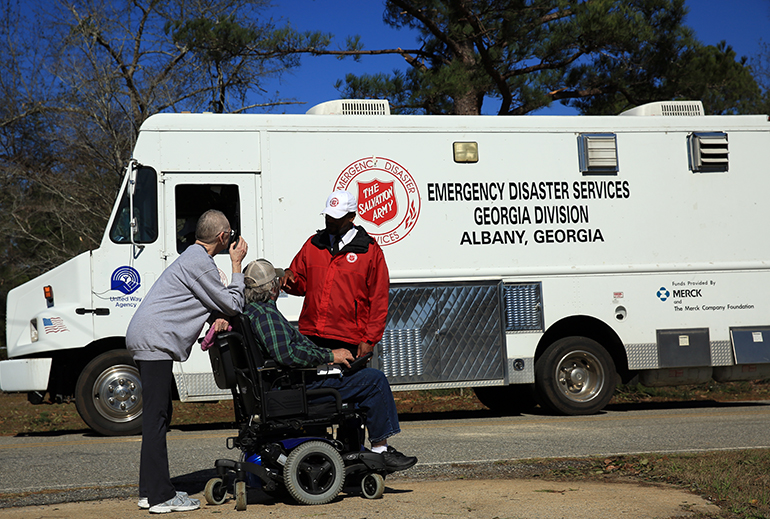 January 24, 2017 – (ALBANY, GA) – Never is the mission and purpose of The Salvation Army felt so strongly by those who serve and are served, then when they converge in the aftermath of personal and community tragedy.  As South Georgia is still in search and rescue mode after Sunday’s severe tornadoes, The Salvation Army of Georgia continues their good work of comfort and aid to those climbing out of the carnage left behind.

As soon as weather conditions and officials permitted, five Salvation Army canteens from across South Georgia started scouring the most severely affected neighborhoods providing food, hydration, and spiritual comfort. Their journeys often meant carefully traversing around fallen trees and powerlines to reach those in need. One canteen was deployed to serve those being sheltered at the Albany Civic Center.

The clear blue skies and crisp, clean air that followed the storms were a stark contrast to the sights of toppled pine and live oak trees that splintered and sliced through homes, vehicles and the lives of South Georgia residents.  Major Kelly English, Corps officer for the Albany, GA Corps, was compelled by compassion for those in his community and undaunted by the devastation before him as he went door to door through affected neighborhoods with four dedicated volunteers seeking those in need.

“These are our friends and neighbors and we are here to help them. That’s what we do,” said Major English.

“You all were the first people to come to us” said one thankful resident, “The next check I write is going to be to The Salvation Army. You people are wonderful!”

As residents became aware of The Salvation Army’s presence in their neighborhoods, some started coming to the canteen for food and water. One family’s home and car were both completely destroyed by fallen trees. “Those things can be replaced,” said a man receiving some snacks and Gatorade, “I’m just so thankful my wife, daughter, and granddaughter and I all made it safely through the storm.”

On the next stop, Major English notices an elderly man in a wheelchair coasting down his driveway to meet the approaching canteen. He greets him at the end of his driveway with some food and drinks and a little extra time for some encouragement and a word of prayer.

To date, The Salvation Army has provided 1,640 meals, 2,066 drinks, and 520 snacks in relief of those affected by the South Georgia tornadoes, but there is still much good work to be done. The Salvation Army will continue to assess and re-deploy resources as needed.