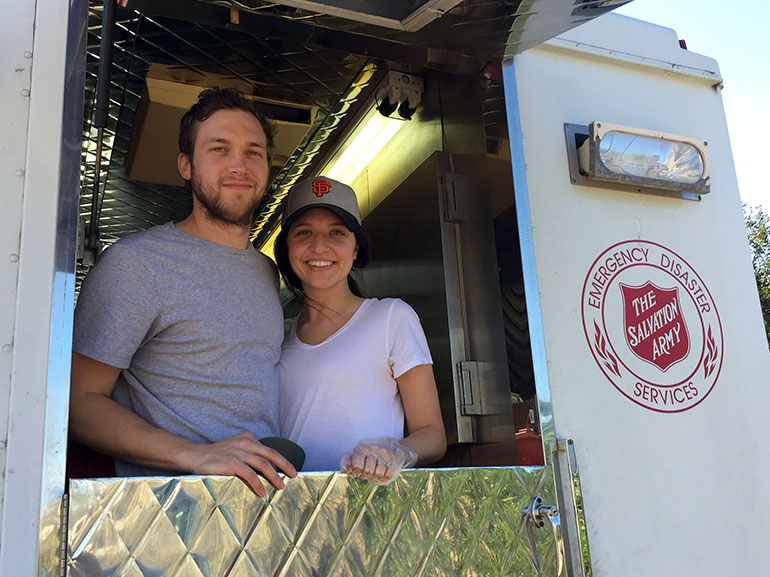 January 26, 2017 – (ALBANY, GA) – Three days after tornadoes ripped through South Georgia, the whirl and buzz of chainsaws continue to mix with the smell of freshly cut pine trees in the hardest hit areas of Albany, GA.  Residents in affected areas are still coming to grips with the devastation as they work to restore their homes and neighborhoods. Those who can, are now reaching out to help their neighbors as local and state emergency crews race to remove trees and restore power to the remaining estimated 1,200 families without power.

The Salvation Army continues to probe and serve affected areas with three roaming mobile feeding units (canteens) from Albany, Bainbridge, and Columbus, GA. In addition, a canteen from Elberton, GA continues to be stationed at the Civic Center where the number of people sheltered there is anticipated to rise as temperatures fall to 32 degrees this weekend. To date The Salvation Army has served 2,573 meals, 2,003 snacks and 3,361 drinks. However, it is anticipated the need for relief services will continue for a while.

Georgia Governor Nathan Deal visited the area to survey the storm’s severity and cautioned that much of the damage was “long term.”

Albany, GA corps officer, Major Kelley English, continues to work with first responders, the American Red Cross, and other non-profits to coordinate and maximize relief efforts.  “We’ve always been there for the people of Albany when they needed us,” said Major Kelley, “and this is a time like they’ve never needed us before.”

Major Kelley and his crew of volunteers were joined Wednesday by Albany native recording artist and American Idol Season 11 winner, Phillip Phillips and his wife Hannah, as they distributed food from the Albany canteen in the most severely impacted neighborhoods. “We are trying to do what we can to help,” Phillips said, “whatever the city needs.”

“It is heart-wrenching because we are seeing people with no home,” said the talented singer,

In neighborhoods where homes were spaced farther apart, Phillips and his wife ventured from the canteen to knock on doors to distribute food and give an encouraging word. “This is my home, these are all my people (and I want to do) all I can,” he said.

Mr. Phillips will be joined by Luke Bryan, another Albany-born music star, for a benefit concert this weekend to help Southwest Georgians impacted by the recent storms that devastated the region.

“You are never promised anything,” Phillips said. “You don’t want to take anything for granted. Until you get out in it, you don’t really know how bad it is.”