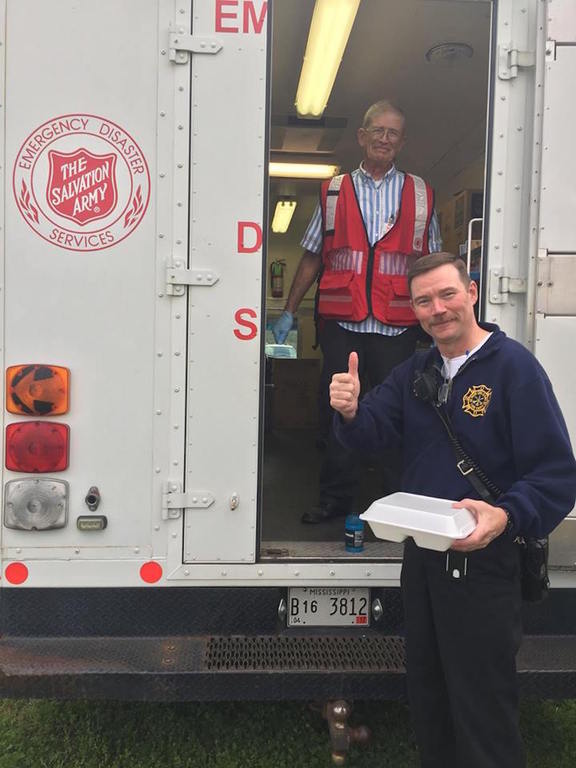 Jackson, MS – Severe weather moving across the southern United States dropped multiple tornadoes Tuesday. The Salvation Army has responded with canteens or mobile feeding units to help serve those in need as well as first responders on scene to help.

“We served 112 meals and 266 drinks from our location, and we plan to help as long as people are in need and recovering from these storms,” said Major David Worthy, Commanding Officer, The Salvation Army, New Orleans Command.

The Baton Rouge Salvation Army dispatched a canteen to Watson, Louisiana in Livingston Parish where workers served almost one hundred meals and drinks.

“This is difficult work for the first responders and a difficult time for those whose homes have been affected. We are grateful to be able to serve them,” said Captain Brett Meredith, Corps Officer, Baton Rouge Salvation Army.

The Salvation Army also has officers and trained employees on location to provide emotional and spiritual care to any residents and rescue workers who might need someone to talk to or allow us to pray with them.

“Our hearts go out to those who have been touched by Tuesday’s events, and we pray the work of The Salvation Army may ease the burden these folks are feeling during these times,” said Captain Meredith.

A tornado also touched down in Houston County, Alabama near Slocumb, Alabama Tuesday evening.  Alabama emergency officials report power outages, trees down over the roads, and several buildings damaged. The Salvation Army canteen from the Dothan Corps is serving in that location.