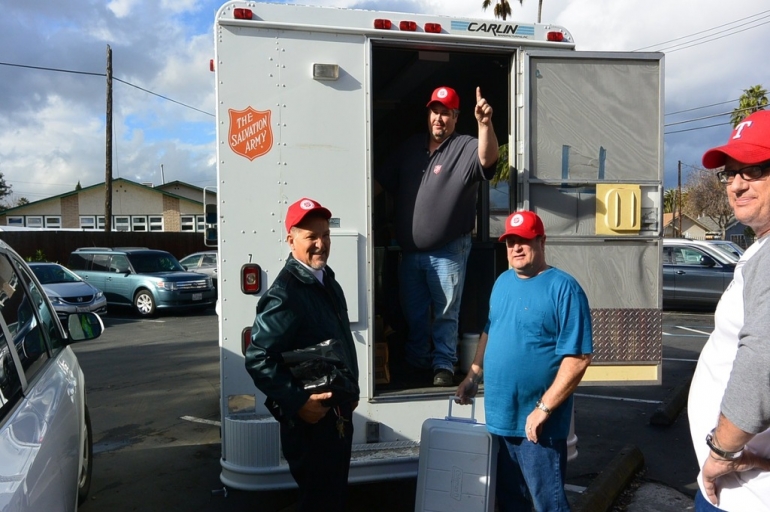 Santa Clara, CA (February 22, 2017):  The Salvation Army in partnership with the City of San Jose and the American Red Cross are responding to the needs of nearly 300 people affected by the overwhelming flooding in San Jose, along swollen Coyote Creek. Two shelters have been opened to assist evacuees, one at Evergreen Valley High School, 3300 Quimby Road and another at James Lick High School at 57 N. White Road.

“When we got the call from the Red Cross, we had all hands on deck to help our community” said Major David Yardley, officer at The Salvation Army Silicon Valley.

On Tuesday evening, in addition to providing 120 dinners, Army staff, officers and volunteers offered much-needed care to a growing number of evacuees, some of whom were rescued by boat from the rapidly rising floodwaters.

“We will continue to provide to comfort, food, and hydration for the evacuees,” said John McKnight, Director of Emergency Disaster Services, The Salvation Army Golden State Division.  Going forward, today we will be serving lunch and dinner,” said McKnight.

“We are grateful to be in a position to serve people in need, and we invite the community to join us in supporting the evacuees,” said McKnight.

The Salvation Army is responding to the needs of those affected by the overwhelming flooding in many parts of California including San Jose, Salinas, Bishop, Turlock, Modesto, and Hollister. The Salvation Army staff, officers, and volunteers will continue to provide much-needed care to a growing number of people.

For the latest emergency disaster services news for The Salvation Army across the United States, please visit www.disaster.salvationarmyusa.org and follow the EDS team on Twitter @SalArmyEDS.